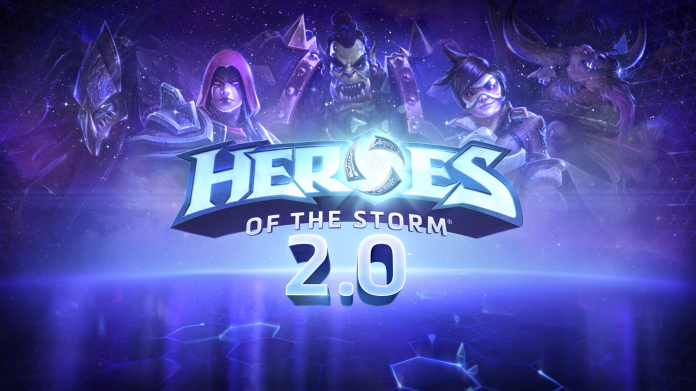 Heroes of the Storm is a seriously misunderstood MOBA and is deserving of a lot more attention. This is 5 big reasons you should try out Hots.

Whether you are a previous Hots player or someone who has never tried it, there is a LOT of reasons to give it a try with the new Heroes of the Storm 2.0 release.

2.0 is pretty much a rebranding of the IP, with a lot of exciting new features. Even though we absolutely love the Blizzard MOBA, there is no denying that the game came out of beta too soon. This caused a lot of mediocre reviews and bad press surrounding the game.

Heroes of the Storm was released with way too many bugs, bad matchmaking, poor rank system, few heroes and more. So if you tried it at release and got scared away, we don’t blame you.

However, Hots today is nothing like the game that was initially released on June 2nd, 2015. Blizzard has come incredibly far since then and has made significant improvements to pretty much every single aspect of the game. With new heroes coming every 3-4 weeks since release, a lot of new maps, UI, and hero reworks and more.

Even before 2.0, Heroes of the Storm was definitely deserving of a second chance, and with the Heroes 2.0 release event, you simply have to try it out. This is more than a simple rebranding of the Hots IP, and Blizzard has truly put a lot of work, money and time into this new and improved Heroes of the Storm.

So, on this list, we will take a look at the 5 biggest reasons to try out Heroes of the Storm 2.0.

Besides the fact that Heroes of the Storm is a fantastic MOBA, here are 5 reasons to try out 2.0.

The original progression system in Hots is kind of alright, but it certainly isn’t very innovative or exciting. It has an utter lack of rewards once your account hit lvl40, which is fairly easy. This combined with an incredibly steep increase in XP requirement once you level a hero above lvl 5, mean that rewards are few and far between.

Besides the fact that the current progression system is slow, boring and not very encouraging. The actual rewards are pretty much always in the form of gold, which is very useful but far less exciting than the new loot chests.

We think that the new progression system will bring a much better flow to the Heroes of the Storm experience. As well as encourage dedication and hard work a lot more.

For a more in-depth description of the new system, check out the video above.

This is a big one. As part of the promotion event for the launch of 2.0, everyone will receive enough gems to buy one of the brand new mega hero bundles, FOR FREE.

What are the mega hero bundles you ask? It is a huge pack of heroes of a certain type of your choice. You can choose between these 4 bundles: Assassin, Flex, Support & Specialist and Tank & Bruiser.

So whether you enjoy playing as a tank, assassin, specialist or support, there is a whole package of free heroes that fit your playstyle. This really ensures that you get a ton of variety right out of the gate, and it’s completely free. So, what do you really have to lose?

Note: For more in-depth information about the mega hero bundles, check out the official page.

3. Hots Has Been Improved in Almost Every Way

If you are one of those that tried the beta and got turned off or read one of the mediocre reviews when Hots first came out, then you really owe it to yourself to try out the new and improved Heroes of the Storm. And I’m not talking about Hots 2.0, I’m talking about the Hots that has received very significant improvements in every conceivable way.

Since launch, Heroes of the Storm has remained in constant progression and we have seen endless improvements to the game since June 2015.

What has happened since the release of Hots:

This is a broad overview of what has happened since June 2015 and up to the launch of Heroes 2.0. If you want a more detailed look, check out the official Heroes timeline.

Heroes of the Storm is a game in constant progression and has some of the most dedicated developer teams we have ever seen, and we cannot wait to see how the game looks another year from now.

The Hots eSports scene at release was low budget and didn’t see much dedication from Blizzard. However, the game itself is not the only thing that has received constant improvements.

The Heroes eSports scene has grown a LOT over the last 2 years. Both in terms of overall quality, prize pools, viewers and general dedication from Blizzard. While it is still a far way away from Dota 2 and League of Legends, we feel like Hots gets closer each year.

It’s not only the big tournaments such as Blizzcon that has improved a lot. Blizzard has also released their new ‘eSports league’ called HGC(Heroes Global Championship). The HGC is the Heroes of the Storm version of LoL’s LCS. This means that almost every week you get to enjoy the best teams in the world compete for their rankings in the HGC and ultimately their ticket to the World Championship.

Heroes of the Dorm

This is the 1 part about Hots eSport that is not only in progression but is also quite unique and revolutionary. Every year, college teams from all over the United States compete in this huge college tournament, with a prize pool in the form of college tuition for the entire winning team.

Much like college football, this is not as high-level play as the big professional tournaments, but what it lacks in professional players it makes completely up for in an insanely dedicated viewer and fanbase. College sports are always intense.

To learn more about the Heroes of the Storm eSports scene, check out the official HGC page.

5. Heroes is a Seriously Misunderstood MOBA

The noob MOBA, The Easy MOBA, The Dumbed Down MOBA and the list goes on. These are just a few names that Hots has received since it’s release, mainly from the League of Legends community. While we can understand the perception from a League players perspective, it simply isn’t true.

You cannot Carry in Hots

A regular argument made against Hots is that it is impossible to carry, due to the team based XP system. While carrying in League of Legends and Dota 2 is much more flashy, due to items making a fed hero extremely overpowered, carrying is very much alive in HotS. It is just not as obvious. However, a bad teammate can sometimes hurt your team more than it does in other MOBA’s, which is where this myth comes from.

There are Almost no High Skill Cap Heroes

League of Legends does have more high skill cap champions than Hots do, without a doubt. However, this is more due to the age of League than the actual hero pool in Heroes of the Storm. On top of this, there is a lot more ”weird” heroes in Hots which can require a lot of skill to master and to efficiently counter.

Heroes of the Storm is an easier version of LoL

There is no last-hitting of minions to gain gold, which is one of the things that cause people to call it a ‘dumbed down’ MOBA. However, are last-hitting for 20 minutes really harder than constant team fighting and tactical rotations?

Tactically, Heroes of the Storm is arguably much more demanding. This is due to the huge array of different maps, which each has a lot of different strategies to master. This also affects the draft, as the drafting shifts a lot depending on the map.

I myself came from League over to Hots simply because I was a huge fan of the Blizzard franchises, and I found myself being hooked immediately. In a way that League never did for me.

Here are a few reasons to try out Hots over League of Legends and Dota 2.

Related: Heroes of the Storm, which is the better MOBA?

Just for the record: We are not saying that Hots is a superior MOBA to League and Dota 2. We are simply trying to shine a light on a very underrated MOBA.

Which of the big MOBA’s are the best is purely subjective and something you need to decide for yourself.

A quick overview of the things coming in Hots 2.0

Shoutout to MasRemlap over at the Heroes subreddit for Hots 2.0 recap.

This article is in no way sponsored by Blizzard or in any way affiliated with them.