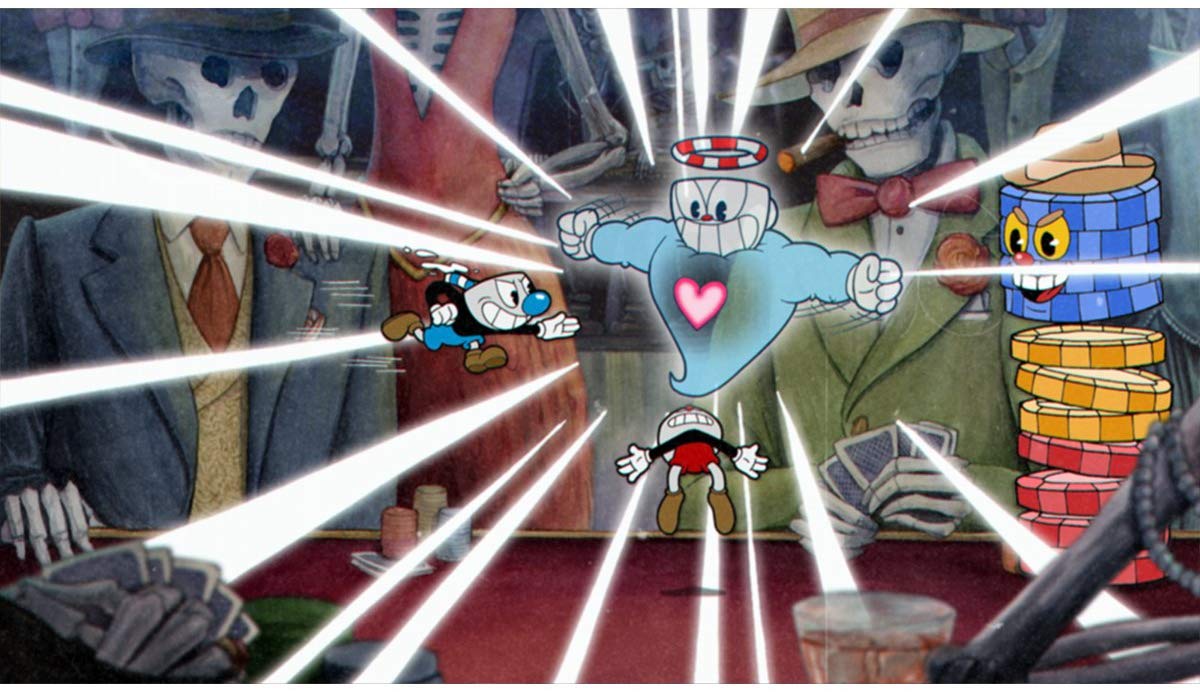 While the multiplayer gaming scene today is dominated by competitive free-to-play games and big online releases we must not forget the original multiplayer format — local cooperative games.

There is something magical about games that can be played side by side in a LAN or split-screen setting.

Note: This article will only contain games that have either split-screen/same-screen or LAN(Local Area Network) available.

Few games embody the concept of local co-op play as well as 2017s Cuphead, and even fewer games have done it as well. Cuphead is a run-and-gun platformer that is inspired by the classic cartoons of the 1930s and is made solely for cooperative play.

The gameplay in Cuphead is incredibly smooth, and while it uses a classic cartoon art style, it is not made just for children. It has some of the most brilliant and well-crafted bosses fights out of any modern game and is the perfect co-op game for two friends looking for a fun challenge.

Portal 2 is perhaps the most celebrated co-op game of the decade and even considered one of the best games of all time by many gamers. A statement we can 100% get behind.

This is due to its incredibly intelligent gameplay and map layout combined with its unique playstyle and a great sense of humor. Portal 2 is all about solving puzzles through clever use of portals and cooperation, and while the concept is simple, the execution is one of the most intelligent game designs to date.

Solving puzzles have never been so satisfying and doing it with a friend is so much fun, Portal 2 might be a tad old today, but it was and still is a true masterpiece that any fan of puzzles or cooperative games has to try.

In a time where a lot of games are born from publishers greed, it is so refreshing to see a game like Divinity: Original Sin which is clearly the result of fierce passion from its developers.

Both Original Sin games are some of the best role-playing games of the decade and its inclusion for co-op play is just the icing on the cake. The world of Divinity: Original Sin is rich with lore and filled with epic adventures and interesting characters, and it is one of the few modern role-playing games that give the player a ton of meaningful choices that shape the world and story.

It’s beautiful graphics, rich world and fantastic turn-based combat are just some of the reasons that Divinity: Original Sin is known as one of the best role-playing games of all time. Very few games have ever been successful at creating such a story-driven co-op experience as the Original Sin games and whether you want to play alone or with a friend, these games are a must play for any fan of the role-playing genre.

Borderlands is another smash hit of this decade that feels like it’s made for cooperative play. It is a first-person shooter role-playing game and the developers somehow managed to do both genres to perfection in a single game.

The gunplay, movement, and overall gameplay is some of the best we have ever seen in a shooter, while the story, characters, and atmosphere of the game makes for one of the most memorable adventures in video game history. Borderlands 1 is excellent, Borderlands 2 is a masterpiece and Borderlands The Prequal is almost as good as the second game, making Borderlands one of the best trilogies of gaming history.

Note that Borderlands 1 is sadly not part of the Handsome Collection as it is not out on the latest consoles. While I would recommend playing the first game as well it is in no way necessary to do in order to enjoy the last 2.

A way out is an action-adventure game that came out in 2018, and it is nothing if not a tribute to the concept of cooperative play. While most games on this list are games with co-op options, this game is made entirely for cooperative play and has no singleplayer mode. Luckily you only need one copy to play it with a friend in either split-screen or online.

You play as Vincent Moretti and Leo Caruso who are sent to prison. You have to work together to survive in prison and ultimately find a way out. The story of A Way Out is quite engaging, and the cooperative aspect is excellent. Very few games have done as good a job when it comes to the feeling of working together with your friend or partner to complete a game.

Friday the 13th is a survival horror multiplayer game based on the popular movie franchise, and it is the ultimate LAN game. I would have given anything to have this game available back in the day when my friends and I would frequently hold LAN parties.

The premise is quite simple. Up to 6 of your friends play as Camp Crystal Lake counselors and 1 play as the infamous Jason Voorhees. The party of 6 have to work together, lay traps and try to survive while whoever play Jason Voorhees have to slaughter the rest. The horrific thrill of being chased as a helpless teenager by your friend who plays a psychopathic murderer is hard to overstate.

This game likely won’t go down as a video game classic like most others on this list, but it is a ton of fun to play at a Netcafe, over discord or at a LAN party.

Few games have ever been as fun to play between friends on the weekend. Left 4 Dead is the ultimate horror multiplayer classic, and it is not a coincidence that it sits at a 10/10 customer review rating on Steam.

Playing as the humans are terrifying in the best possible way. While jumping your friends as a pack of zombies is just a ton of fun. The game also has a surprising amount of tactics and strategy to it for a zombie game. The only downside is that it has not been ported over to the latest consoles.

It’s a ton of silly fun and the perfect party game to have at home when you have friends over. Moreover, it is surprisingly good from a gameplay standpoint and very competitive which is not what you would expect from such a goofy game.

If you are a fan of Nintendo, co-op games or even just fighting games, this is definitely one worth picking up.

Rocket League is one of the biggest smash hits of the last decade and took the gaming world by storm back in 2017 with its simple, goofy and incredibly fun gameplay. And while it is a lot of fun to play online against strangers, this game is downright magical to play against friends.

The premise is this; you drive around on a soccer field in a vast array of different cars and have to drive the ball into your opponent’s goal. It might sound silly on the surface, but the game has a surprisingly high skill-roof and allow for some genuinely high-skilled plays. It has even become one of the larger esports in the world.

Hate it or love it, Minecraft has remained one of the most popular video games in the world for nearly a decade now and shows no signs of slowing down. On the off chance you don’t know what Minecraft is about here goes:

Minecraft is the ultimate sandbox game with virtually endless ways to play it. It has millions of mods, custom maps and can be whatever you want it to be. The base game is a survival sandbox game but due to the modding community, you can do a ton of different stuff in Minecraft.

The base gameplay is incredibly simple. You can harvest resources, build things and explore but the possibilities are endless. While some people enjoy playing Minecraft alone, it is recommended that you play with friends and luckily Minecraft support both online, LAN, and split-screen(console only).

Rainbow Six Siege is the perfect multiplayer shooter to test out you and your friends tactical and cooperative skills. It has some of the most excellent gunplay out of any shooter on the market today and offers a ton of different ways to complete your objective.

Rainbow Six Siege is basically a highly advanced version of Counter-Strike, and best of all it has the option for LAN play.

You play as Rayman, and up to 3 friends can join in on your adventure which makes the game even more enjoyable. It is also well integrated so that your friends can join and leave as they please without it affecting your progress at all.

The world of Rayman is full of goofy adventure, challenges, and danger. Few genres are as well fit for cooperative play as a classic 2D platformer and Rayman Origins is among the very best.

Call of Duty: Black Ops 4 might have gotten a lot of bad press for their overly aggressive monetization system, and rightfully so. However, that doesn’t change the fact that it is fully integrated for split-screen and LAN play and Zombie mode remains one of the most fun side-by-side couch gaming experiences out there.

The fact that there is no campaign is definitely a bummer, but when both Zombie mode, Blackout(battle royale) and regular online play is as fun as it is in Black Ops 4, I would still recommend it to anyone who wants a great game to play when friends are coming over.

Don’t Starve Together is the multiplayer mode for the 2013 masterpiece, Don’t Starve. Which is a very unique survival game with an in-depth crafting system and dynamic nights and overall wonderful gameplay.

Don’t Starve is among the best survival games of the past decade and adding a multiplayer mode has only enhanced that experience. The co-op mode is fully functional with both LAN play and split-screen which is always wonderful to see.

Now we move on to the ultimate LAN party game of my generation, Warcraft 3. This is the masterpiece strategy game that gave birth to the World of Warcraft and one of the best games of the 2000s.

This article is about modern or recent games, but Warcraft 3 gets a pass seeing as it gets completely redone in 2019 with Warcraft 3: Reforged. Oh, and also because it is one of the best real-time strategy games of all time and has some of the most excellent community mods out of any game. Most notably Defense of the Ancients, which gave birth to the MOBA genre.

Warcraft 3 has arguably the best campaign out of any strategy game ever produced, but it is equally good when it comes to online or LAN play. Regular versus games are a lot of fun but what makes it such an excellent LAN game is the thousands of brilliant custom maps that the community has crafted throughout the years. Footmen Frenzy, Wintermaul Wars, DOTA, and endless more. All iconic game types that were the centerpiece of many LAN parties in the 2000s and hopefully with reforged a brand new generation gets to experience it as well.

-The Razer Basilisk is a highly customizable mouse with excellent ergonomics and top-of-the-line specifications. Its design is both lightweight & comfortable and fits really...