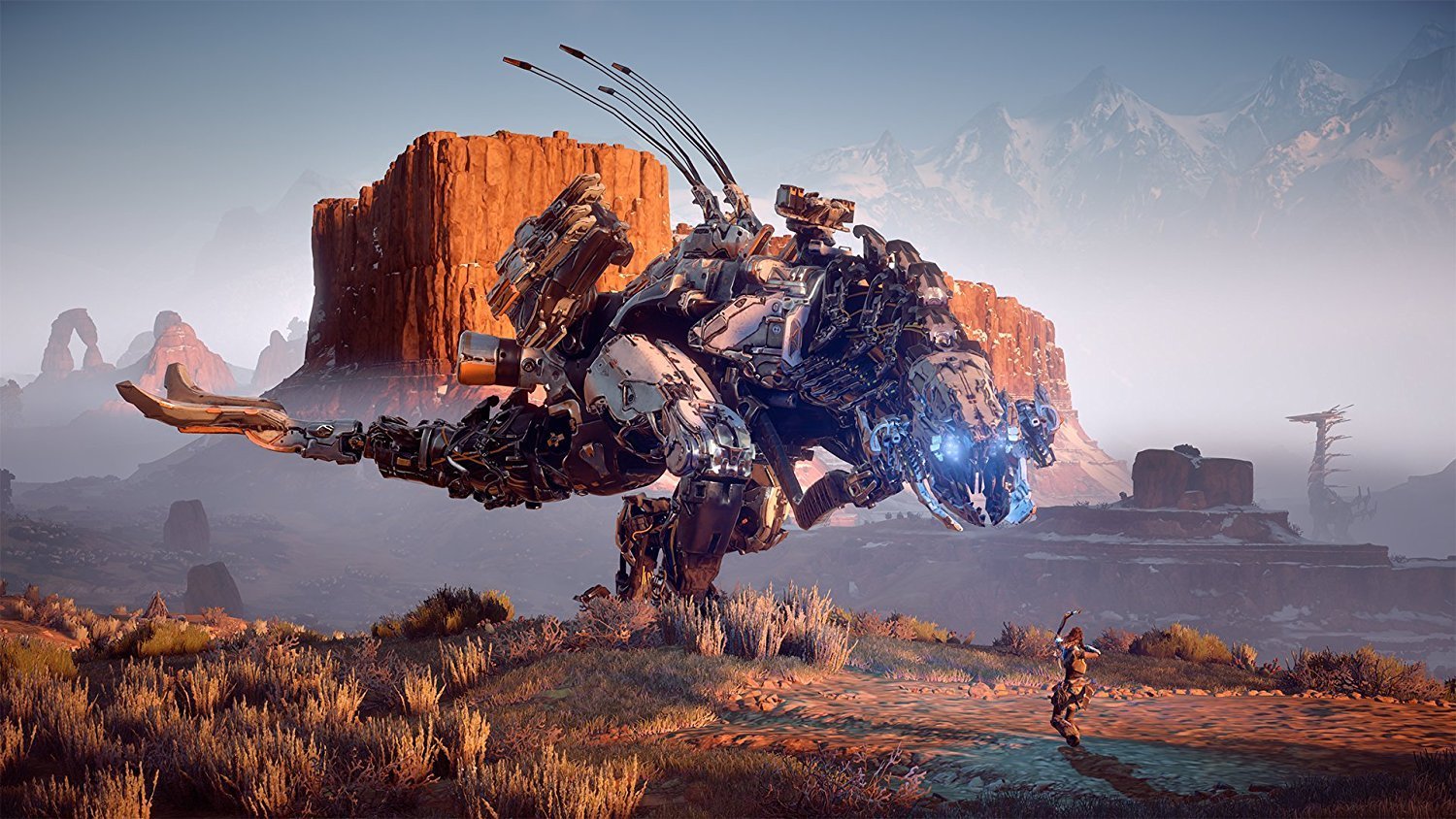 With 2017 coming to a close it is time to look at the very best games of the year(so far).

It has indeed been a tremendous year for gaming, and thus, we are forced to make this list a bit larger than we originally intended.

For your viewing pleasure and convenience, we will be dividing the list into three tiers.

The Legend of Zelda: Breath of the Wild

Breath of the Wild had a LOT of hype to live up to, and more often than not, games with this amount of hype tend to disappoint generally. Luckily, Zelda: Breath of the Wild managed to live up to the high expectations fully and created one of the best Zelda games of all time. With its massive world, great story and interactive gameplay it hits almost all the right keys and is a hell of a ride.

Another highly anticipated game that managed to not only live up to the hype but superseded it. Then it went on to do something even rarer, make a quality piece of DLC. The Frozen Wilds is a solid addition to an already fantastic game, which is why we recommend the Complete Edition.

Horizon Zero Dawn offers some great gameplay and visuals, but what really drives the game is the story. This new franchise has such phenomenal lore and characters that you are instantly lost in this new, wonderful world.

Playerunknown’s Battlegrounds or ‘PUGB’ is the biggest success story of 2017, and it hasn’t even released yet. The game has sold over 20 million copies before it’s official release date. This number is absolutely absurd, and it already broke several records during its beta. Such as ‘most concurrent players on steam” formerly held by Dota 2.

PUGB is basically the video game equivalent of the Hunger Games. You and the other players are dropped down on a deserted island with weapons and equipment scattered throughout the island. You then go on to fight for your life and the last man standing is victorious.

It is impossible to overestimate how absurdly popular this battle royale tactical shooter has become throughout the lifespan of its beta, and we understand why. The game is the most addictive online multiplayer shooter to be released in a very long time, and we are genuinely excited to see where PUGB goes from here.

I have to admit that I thought Persona 5 looked and would be awful when I first saw a gameplay trailer. It seemed way too dependent on one’s love of the anime art style. However, I grew wiser.

Whether the art style turns you initially off from the game, I do recommend giving it a shot. At its core, it is a phenomenal role-playing game, filled with rich characters, stories and most of all decisions. Something of which there is too few these days.

In a gaming industry filled with microtransactions, loot boxes and paid DLC, there are very few companies left that are in it for the love of games rather than the love of money. Larian Studios appears to be one of those few heroes, standing tall alongside the likes of CDR Projekt Red and Naughty Dog.

It is an insanely smart tactical RPG that offers the player with endless of options on how to tackle every single obstacle. On top of that, it has rich stories, characters, and lore and is simply one of the best games of 2017. If not the best.

How do you make a game from a 30-year-old franchise feel fresh? No clue, but Nintendo managed to do just that. Super Mario Odyssey is the best 3D Super Maria game to date, with it’s incredibly polished and innovative gaming experience.

It is the fastest selling Mario game of all time, and we can see why. In a year where Zelda: Breath of the Wild was released it still manages to be a contender for the best Nintendo Switch game of the year.

Even though Resident Evil 7 was a huge success and really redeemed the RE franchise. The Evil Within 2 is still my favorite horror game of the year. That being said, The Evil Within is more of a classic survival game whereas RE7 is more straight up horror.

While the first in the series was a mediocre horror game experience, the second installment really cranks it up in every way. Better gameplay, better graphics, and a better story. All of which makes for likely the best survival game experience of the year.

This was a bold move by Naughty Dog. With the risk of tarnishing the beloved Uncharted franchise they went and made a new standalone Uncharted game with a new protagonist. It could have gone wrong in so many ways, but boy did they nail it!

The Lost Legacy is everything that made the Uncharted franchise great(apart from Nathan Drake). Beautiful set pieces, great characters and most of all, a phenomenal story. While not entirely as good as the Nathan Drake games, it comes pretty damn close, and all fans of the Uncharted series owe themselves to try it out.

Who doesn’t want to pitch their favorite superheroes and villains against each other in a classic streetfighter style fighting game? This DC Comics fighting game is brilliantly done and is as good as a fighting game can be really.

If you are looking for a game to pull out when you are entertaining guests, then Injustice 2 is perfect. It is the best couch multiplayer of 2017 and recommended to anyone who is looking for a great ‘friend versus friend’ game.

Another great game to come out of the east this year. This Japanese action role-playing game has it all. Deep narrative, beautiful settings, and music alongside some engaging gameplay.

Unless you dislike the eastern game style, then I highly recommend you experience this incredible game.

The Total War series might have struggled in later years, but Warhammer 2 breathes new life into the franchise with an invigorating campaign, beautiful graphics and immersive lore.

This is a must-have for any RTS fan, Total War fan, or Warhammer fans.

Nioh is a pleasant mixture of the Witcher 3’s folklore setting, although the Polish has been swapped for Japanese folklore. Mixed with the gameplay of the Dark Souls series. While not as good as either Dark Souls or the Witcher 3 it does a good job.

Despite the fact that it is pulling essential elements from those franchises, Nioh manages to be its own game still and is a hell of a ride. Which I highly recommend to any fan of the RPG genre. Especially if you are a fan of either the Dark Soul or the Witcher franchises.

Cuphead is one of the best gaming deals of the years. It cost’s half of a regular New-gen game but is better than most full-priced triple-A games.

Cuphead is a must buy for any Platformer enthusiast, unless you are afraid of a challenge. Even though Cuphead looks much like an old game for kids, it is incredibly challenging and therefore incredibly satisfying to complete.

The expectations were high for the sequel to the critically acclaimed Wolfenstein: The New Order and it mostly managed to live up to the hype.

Wolfenstein 2: The New Colossus has a superb cast of characters that you fall in love with instantly, which really invests you in the story. The gameplay is fast, brutal and at times a bit silly, but perfectly so.

Does it make sense that you run rampant through the map with two huge machine guns with ease? No, but Wolfenstein 2 TNC finds the perfect middle between silly, over the top gameplay and an earnest and dark story.

Wolfenstein 2: The New Colossus will leave you both laughing and crying and is recommended to any and all gamers.

It is no secret that the Assassins Creed franchise lost a lot of its flair in later years. It didn’t seem like Ubisoft made the games because they wanted to but just to milk more money out of the franchise. Assassin’s Creed Origins is the first AC game since Black Flag that actually feels like a game rather than a Ubisoft Cash Cow.

AC: Origins shifts the game over to a more RPG’ish style which suits the game very well. Assassin’s Creed has never looked this good, and I highly recommend it to any fan of the AC franchise. Even if you had given up on it. AC: Origin really breathes new life into the franchise.

Destiny 2 is by no means a perfect game, but it still has a lot going for it. If you remotely enjoyed Destiny 1, then the sequel will definitely be worth your time and money.

It is better than it’s predecessor in almost every way. Both the ‘player-versus-player’ and ‘player versus environment’ aspects are a LOT of fun. Sadly, the game does get very repetitive, especially the PVE aspect.

This indie game does a brilliant job of simulating what it is like to be inside an actual nightmare. Little Nightmare get’s really scary in weirdest possible ways, and despite being a cheaper, ”indie” experience, it has true triple-A production value.

I would highly recommend it to anyone who digs the horror genre.

Prey was one of the most hyped games of 2017, and while it didn’t end of being the best game of 2017, it is still an excellent game.

Especially fans of the Bioshock franchise will enjoy this game. It is built on the same core gameplay mechanics and style. But with a vastly different story and atmosphere.

South Park: The Fractured But Whole

Much like the first South Park game, the Stick of Truth, this is a must play for any fans of the South Park franchise. It’s hilarious, outrageous, and has surprisingly deep gameplay.

If you are a big fan of the South Park series, then you have to get this brilliant RPG.