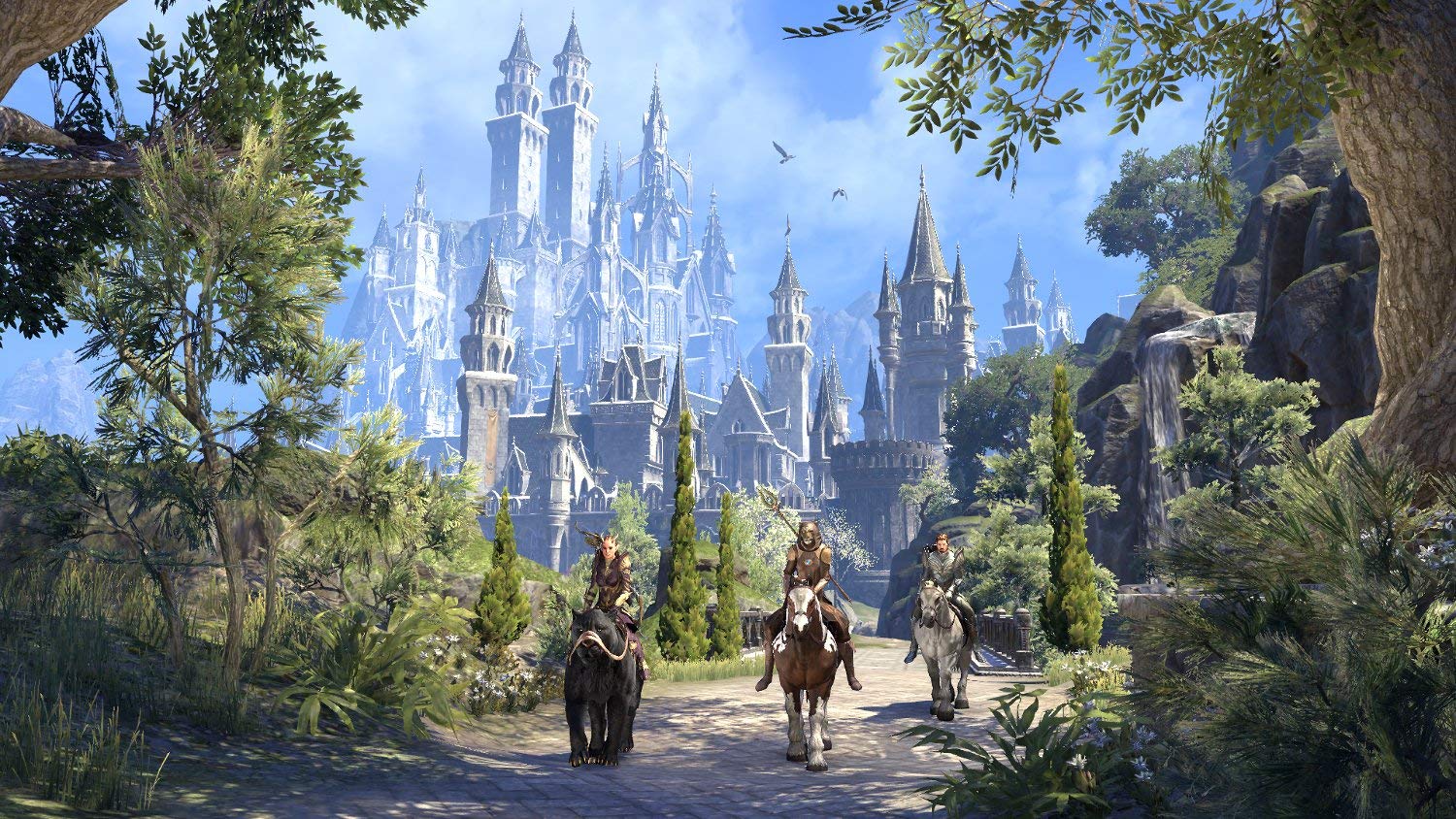 Playing by yourself in a singleplayer game can be a lot of fun and, at times, is all you need.

However, nothing is quite as addictive and exciting as exploring a massive world full of quests and adventure alongside millions of other players.

Few games have hooked people in like World of Warcraft, Everquest, and Runescape, and there’s a good reason why.

MMORPGs offer something for everyone, and whether you want to go questing alone, slay a dragon with your guild or maybe just want to kill other players, the massively multiplayer online role-playing game genre has something for you.

Today we are taking a look at the best MMORPGs currently on the market and which ones are worth checking out today.

So equip that helmet, unsheath your sword and let us jump into it.

What it does best: The best questing experience out of any MMORPG on the market. ESO is also the most ‘RPG’ish’ modern MMO on the market with excellent character progression and fantastic lore.

The Elder Scrolls Online(ESO) got off to a terrible start with a disastrous launch back in 2014 but has since improved on almost everything in the game tenfold.

The Elder Scrolls Online is an actual role-playing game, something that is ironically becoming quite rare on the MMORPG market. ESO offers incredible depth in terms of character progression, crafting and professions, excellent player housing, and character creation. All of which, combined with a magnificent world to explore and incredibly deep lore, makes it a real role-playing adventure.

The lore and voice acting of ESO alone make it worth playing even if you are not looking for an MMORPG and just want a singleplayer role-playing experience.

If you are genuinely looking for an adventure in the traditional sense and want to immerse yourself in a rich fantasy world full of colorful characters and exciting stories, then ESO is the best one out there.

What it does best: Character freedom and choice. You can pretty much do anything and be anything on any character. It also has the best and most in-depth profession and crafting system on the market.

Final Fantasy XIV(FFXIV) is a fantastic alternative to World of Warcraft if you are looking for a new, beginner-friendly MMORPG that is easy to pick up and play as a new player. It is easy to get into but still have a decent amount of depth, especially when it comes to crafting and character customization.

FFXIV also has some of the best quests and instanced content on the market, the world feels alive, and the lore is great once you get into it. The game also incentivizes you to socialize and has a very vibrant and friendly community.

Overall it does well in every section apart from Player-versus-player combat. FF14 does have PvP, but it is by far its weakest point, so if PvP is your favorite type of content, I will recommend sticking with World of Warcraft, ESO, or Guild Wars 2.

What it does best: Unparalleled raids & dungeons content and the most refined overall gameplay experience.

World of Warcraft’s might not be as revered and popular as it used to be, but it is still by all indication the most popular pay-to-play MMORPG on the market, and there is plenty of good reasons for that.

World of Warcraft(WoW) is still the king when it comes to Player-versus-environment(PvE) encounters, and it also offers by far the smoothest and more refined gameplay experience out of any MMORPG out there.

It is also the best on the market in terms of accessibility, so if you are worried that you might not have the time to commit to a traditional MMORPG, then WoW might be the perfect fit for you. World of Warcraft has something for every type of player. The entry-level content like quests and dungeons are incredibly easy and accessible, while high-level content like Arena and Mythic raids are challenging for even the most hardened players. It is the ideal game to jump into for casual players while still offering fantastic content for high-end players with excellent raids, mythic dungeons, and engaging player-versus-player combat.

However, if you are looking for an in-depth and more traditional MMORPG that rewards exhaustive time commitment, then World of Warcraft is likely not for you.

Still, haven’t decided on a class for Classic? Here are a full WoW Classic class overview and picking guide.

What it does best: The original World of Warcraft has the best and most fulfilling reward structure out of any MMORPG on the market. It also offers one of the best social experiences you can have in a game as it rewards and incentivizes social interactions.

I am not going to lie, I am personally a bigger fan of the old ”Vanilla” World of Warcraft than the modern one, but it’s not objectively better.

Not everyone will love it as some of the mechanics will feel outdated if you are used to modern games. However, sometimes the old way is better, and World of Warcraft Classic might surprise you.

This is the game that took the entire world by storm back in 2004 and redefined the MMORPG genre and the gaming industry as a whole. So, why is that?

World of Warcraft Classic has an old school but an incredibly well-structured reward system. It’s quite simple; you work hard, you get rewarded appropriately. This also means that the game is very unforgiving by today’s standards as nothing is handed to you, but in my opinion, that is why Vanilla World of Warcraft is the most fulfilling MMORPG of all time. It strikes the perfect balance between rewarding hard work and not being overly punishing like Everquest and Runescape with death penalties and so on.

The game has also aged incredibly well, and due to the unique Warcraft graphical design, it does look pretty well even today, which is complemented nicely by some of the most atmospheric zones and memorable soundtracks of all time.

World of Warcraft Classic will likely shock modern WoW players that started playing later on, but I also think it will surprise a lot of people. I believe that once some players get a taste of the community and reward structure of the Classic World of Warcraft, they will have a hard time letting go, even those that don’t expect to like it.

What it does best: Best classic MMORPG with immense character customization, in-depth progression, and intense grinds.

Now you might be thinking; Who in their right mind wants to play a game from 2001? Well, the answer is a LOT of people, even more than play the modern version of Runescape, and there’s a reason for it. Old School Runescape(OSRS) is the best and most authentic classic MMORPG currently on the market, and if you were one of those that found World of Warcraft to be too casual back in 2004, then this is right up your alley.

While the graphics will probably scare off a lot of people, I recommend that you look past them and give it a shot as OSRS has a lot of things going for it. It has some fantastic old school itemization and character progression systems, the likes of which you cannot find in any other modern game.

The 2013 classic Runescape remake is honestly one of the best MMORPGs on the market right now has a whole lot more depth to it than what the modern gaming industry offers.

If you enjoyed the role-playing games of the 90s and found the modern games of today to be too casual, then OSRS is the perfect game for you.

What it does best: Has BY FAR the most exciting implementation of mounts out of any MMORPG—fantastic large-scale PvP.

As someone who only tried the original Guild Wars back in 2005 and then didn’t play Guild Wars 2(GW2) until recently, I was quite shocked at how good this game is. It has a unique feel to it and feels more polished than almost every other game on this list. On top of that, it also has an incredibly fair business model with the base game being free-to-play and only having to pay for expansions.

The story in Guild Wars 2 is one of the things that took me by surprise, as I never had any real expectations for it. However, the recent content is entirely voice acted, including your character, and the stories are excellent for the most part.

So what about endgame? This is another thing that Guild Wars does pretty well and, in particular, the player-versus-player side of things. GW2 has excellent content in both the PvE and PvP department, but the large scale battlegrounds in Guild Wars are some of the most fun PvP I’ve ever tried in an MMORPG.

Lastly, I need to mention the mounts as it’s one of the unique features of Guild Wars 2. Instead of having a ton of different mounts that are mostly the same, you have different types, each with unique abilities and progression. Such as the manta ray for gliding across water or the bunny for vertical jumps, and all of the different types is ten times more fun to use than mounts in the MMORPGs you are used to.

Guild Wars 2 is in better shape than ever, and I recommend anyone who never gave it a try to do precisely that as it does most things very well and has some uniqueness and triple-A polish to it.

What it does best: It is a very accessible and easy to get into free-to-play MMORPG.

One of the big influencers on World of Warcraft and one of the oldest ones still being updated. Runescape is one of the best free-to-play MMORPGs on the market right now, especially if you are looking for a very accessible game that doesn’t take up all your time.

Much like World of Warcraft, Runescape has changed a lot since it’s release and has gone from one of the most old-school and hardcore MMORPGs to a very casual friendly one that you can quickly pick up and play.

The world looks pretty good, and both PVE and PVP combat works well for a free-to-play game.

What it does best: Black Desert Online has the best fast-paced action combat system out of any MMORPG.

Black Desert Online(BDO) is a mixed bag for me as there are so many things I love about it, but the way they monetize the game ruins a lot of it.

BDO has excellent and fluid combat, outstanding graphics, and a fantastic world to explore. It is also old school in its progression with some massive grinds that you can sink your teeth into, which I honestly quite like.

However, the game is overly monetized, in my opinion, and the fact that the only way to cosmetically stand out is if you pay for it is a big turn off for me. I know it is a subscription-free MMO, and some microtransactions are to be expected but to remove the entire concept of visual progression from an MMORPG is taking it a bit far, in my opinion.

Nevertheless, Black Desert Online is still a fantastic eastern MMO with stellar action combat and a beautiful world to explore. The only real downside is that visual progression and customization are almost entirely hidden behind the cash-shop.

-Razer DeathAdder V2 Mini is an ultra-lightweight gaming mouse with incredible performance & exceptionally comfortable design. Weighing in at only 62g, it is a...