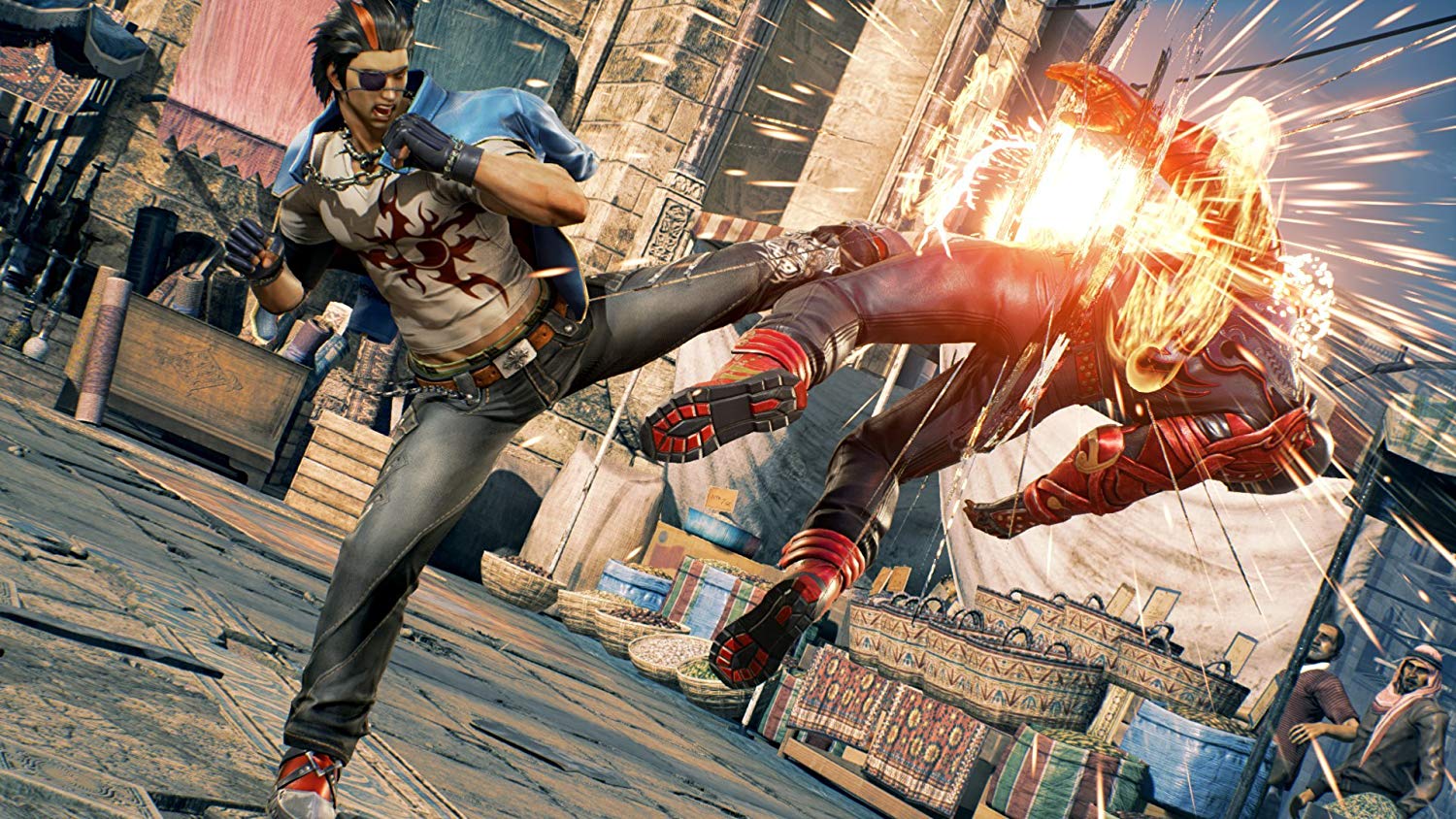 Every gamer deserves to own at least one fighting game.

They are perfect for a quick burst of fun that doesn’t require a ton of time to get into, but at the same time, they offer substantial mechanical depth.

Fighting games appeal to everyone from the casual gamer that wants a fun game to whip out when guests come over but also the hardcore competitive player that wants to test and improve his mechanical skills and rise on the ranked ladder.

No matter what type of player you are, there are bound to be a perfect fit for you on this list as we have gathered the very best fighting games to play today.

The Dragon Ball series has long been one of the most beloved and well-known anime’s in the world, and Arc System Works has managed to create a fighting game that is truly worthy of the series. Dragon Ball FighterZ lets you fight it out as one of the many memorable characters of the Dragon Ball universe, such as Gohan, Krillin, Cell, and many more.

The game has an incredibly fast-paced and fun arcade mode, which is your regular fighting game type, where you can use the immense and awesome powers that the character of Dragon Ball has. Each character has a lot of unique skills and abilities to master, and the depth of the game from a competitive standpoint is astounding. On top of the regular fighting arcade game mode, you also have a surprisingly good story mode to go through that tells the original story of Android 21, which takes place between ”Universe 6” and ”Future Trunks”.

Dragon Ball FighterZ is one of the best fighting games to come out in the last decade, and the fast-paced nature and depth of this game cannot be overestimated. Combine that with one of the better story modes in the fighting genre, and you have a game that is a pure joy to play.

Back in 1997, Tekken 3 cemented the Tekken series as one of the best fighting game series of all time, and over 20 years later, it remains one of the most popular brands in the genre. Tekken 7 does an excellent job of staying true to the original feel of the franchise while still innovating with the gameplay with systems such as the new Power Crush and Rage mechanics, which are both a lot of fun and adds a good bit of depth.

Tekken 7 is at its core a one on one fighting game that tests your mechanical skills, but it also offers you with a continuation of the Tekken story that Tekken 6 told. Tekken 7 focuses on the events leading up to the final standoff between Heihachi Mishima and his son Kazuya.

Tekken 7 is the best game in the series since Tekken 3, and it offers a wonderful combination of the familiar trademark Tekken gameplay with just enough innovation for it to feel fresh.

The Soulcalibur series has always had a unique take on the fighting game genre and switches the focus away from martial art and on to swords and spears. Furthermore, Soulcalibur 6 is among the best in the series and offers an incredibly smooth and fast-paced fighting experience, which is nicely complemented by the great cast of characters and several different modes to play through.

Soulcalibur 6 is a top-tier fighting game to play against friends, but what makes it stand out is its various game modes. Each is offering a unique experience, and I’d go as far as to say that Soulcalibur 6 is the best solo experience I have had in a fighting game in the last decade. The game offers two story modes, one that takes you through the early lore of Soulcalibur and another that lets you create your own character and go on an RPG-like adventure. Both of these are great, and especially the RPG mode makes this one of the best singleplayer fighting games I have ever played.

While the game is excellent for solo play, it doesn’t mean that it is not equally great for player-versus-player activities. The controls are incredibly intuitive, and it’s pretty easy to get a hold of the basics, but it also has a lot of depth to it, and the ranked ladder is the perfect place to test your skills. Soulcalibur 6 is a phenomenal fighting game that also offers some excellent story content and an absurdly deep ”create your character” function.

Mortal Kombat X is one of the best in a series of 10 games that has a close to perfect record, and that should tell you a little something about how good the combat in Mortal Kombat X is. Mortal Kombat X is by far the most brutal and mature fighting game on this list, and if you have issues with gore and graphic murder in video games, then this game is likely not for you. In Mortal Kombat X, you don’t just beat your opponents. You absolutely murder them.

The Mortal Kombat series has given us some of the best fighting games of all time, and that is primarily due to the fighting mechanics themselves, and those mechanics have never been better than in Mortal Kombat X. The fights are smoother than ever before and offer more mechanical depth than all of its predecessors, and fighting it out in Versus mode has never felt better.

While the story is not entirely on par with Mortal Kombat 9, it is still really good, and if you are into the Mortal Kombat universe, then you will likely love the campaign. The great story and superior fighting mechanics make this my favorite Mortal Kombat to date, and I encourage any fan of the fighting genre to try it out.

The sequel to 2013’s Injustice: Gods Among us builds further onto the Injustice universe and manages to improve from the first game in almost every way. Injustice 2 is targeted at fans of the DC: Universe, but the game is good enough to appeal to just about anyone. The game offers a good amount of different game modes, which also include a surprisingly good story mode that feels like more than just another fighting game campaign.

What makes Injustice 2 stick out from the other fighting games is its variety in playstyles due to the vast cast of very different characters. Fighting as the Green Lantern feels vastly different from playing as Superman or Harley Quinn and so on, which helps to keep the game feeling fresh. Injustice 2 also has an excellent progression system that allows you to upgrade all the heroes and villains in a very RPG-like way, and the only downside is that such a system comes with micro-transactions, which luckily doesn’t feel very required to play.

Fans of the DC Comics universe will love Injustice 2, but gamers who just want a solid fighting game are likely to enjoy it as well. It has a very varied set of characters, a great campaign, meaningful progression. It is just overall a rock-solid fighting game and my favorite superhero fighting game on the market today.

The best couch co-op fighter of all time.

Ever wonder who would win in a fight between Pacman and Mario, or perhaps between Pikachu and Link. Well, with Super Smash Bros. Ultimate, you no longer have to wonder. Instead, you can fight it out with a massive roster of all the most notable Nintendo characters through the ages.

Super Smash Bros is an absolute must-have if you own a Nintendo Switch, and it is quite possibly the best fighting game on the market for battling it out against your friends on the couch. It’s wonky, its fun, it’s ridiculous, and it’s fully fleshed out with some of the best and most iconic video game characters of all time.

While it is less serious than the other games on this list, it is no less competitive and has some of the most tightly tuned balance of all the fighting games on this list. The only real downside to this masterpiece is that it is a Nintendo exclusive, and if you do happen to own a Switch, I highly recommend you get a hold of Super Smash Bros right away.

Street Fighter 5 came out to very mixed reviews back in 2016 and received criticism for having too simplistic mechanics as well as a cash-grab business model.

As a long-time fan of fighting games, I will agree that the gameplay is too simplistic for me, but I cannot deny that Street Fighter 5 is a great introduction game into the fighting genre. Playing overly complicated games with hard-to-do combos is not the most satisfying for new players. Street Fighter 5 gives casual fighting fans plenty of interesting characters to play and does an excellent job of making the player feel like he’s doing well.

That being said, if you are an experienced fighting game player, then I would recommend any of the other games on this list before Street Fighter V.