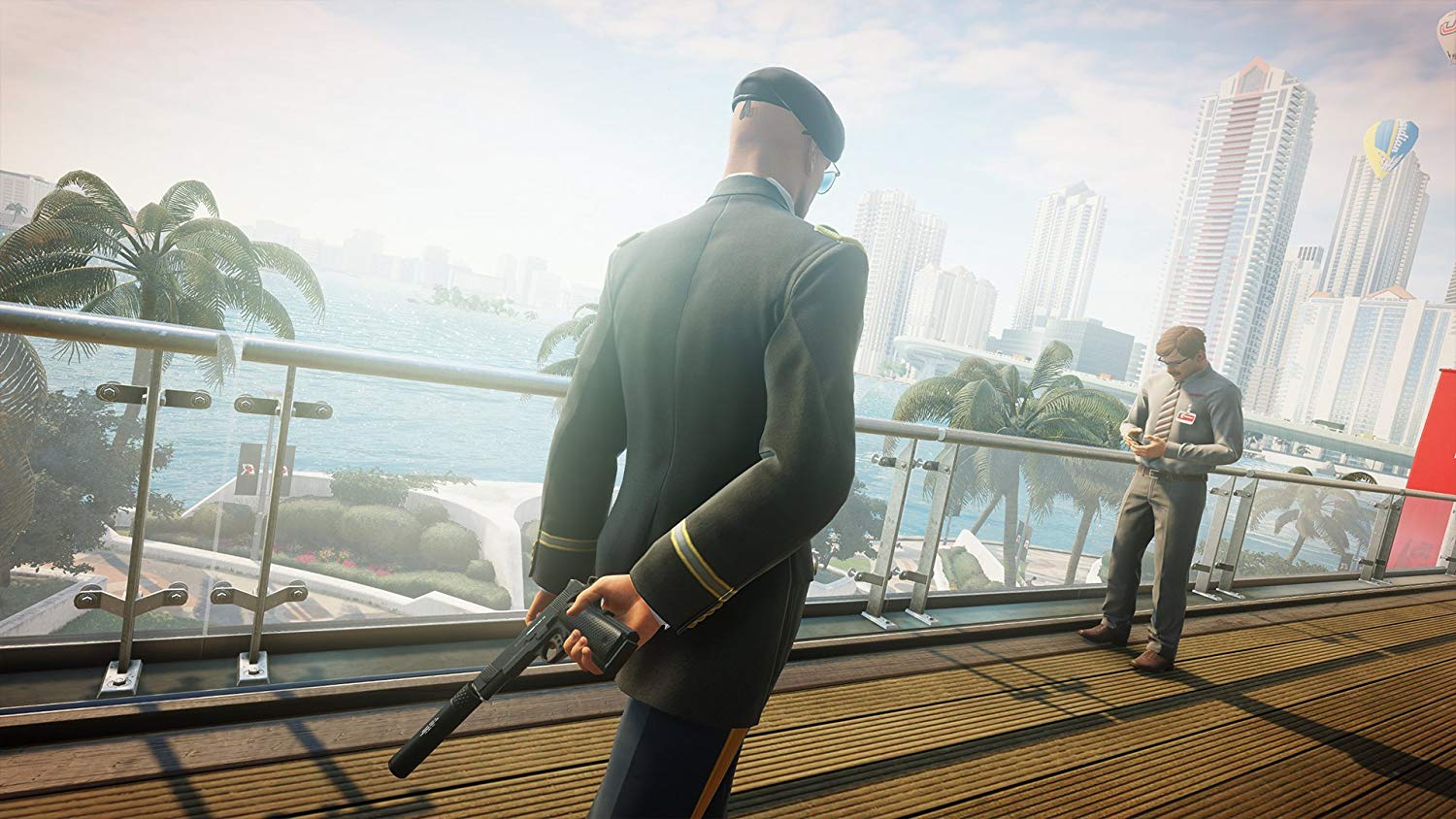 in gaming, it can be fun to run in guns blazing, but sometimes it’s more enjoyable to take a more sneaky approach.

There is something unquestionably satisfying about performing a stealth mission to perfection, whether it’s delivering a silent assassin takedown in Hitman or just sneaking past an army of guards in Dishonored.

So today we take a look at the very best stealth games that PC and console gaming have to offer in 2019.

The first Dishonored came out back in 2012 to raving reviews and this day it remains one of the very best first-person stealth games of all times. Taking place in a world that feels both Victorian and utterly unique at the same time and the look makes Dishonored stand out. You play as Corvo Attono who is the former bodyguard of Empress Jessamine and gets wrongfully accused of the empress murder. So throughout the game, you are wanted and on a mission to clear your name and find the real murderer.

Dishonored is mostly a stealth adventure game but at times it has some solid role-playing elements in it as well. Such as choosing abilities when leveling up and making decisions that have an actual impact on the world and story in your playthrough. Your choices are not judged to be good or evil but instead affect your ”Chaos level” which will change depending on your actions, such as killing or sparing enemies. The combat is a beautiful mix of abilities such as teleport and good old-fashioned weaponry such as sword and crossbow, all of which is really satisfying to use.

Both Dishonored 1 and 2 offer you with a great deal of choice in how you want to execute the missions, a fantastic story, and awesome stealth-based gameplay with some wonderful RPG and action elements sprinkled on top.

Hitman is the perfect assassination simulator and one of the most fun and unique takes on the stealth genre. Hitman is all about hiding in plain sight using clever disguises and distractions to get close to your target and execute your mission. In Hitman there are a billion different ways to execute your contract, and the only real limit is your imagination, and I’m not even exaggerating.

2016’s Hitman is one of the best stealth games to date, and the amount of detail and options put into them is astounding, and it makes the world incredibly immersive and believable. The game is also a huge challenge if you try to go for clean assassinations with few to no witnesses but is quite doable by everyone if you go for the kill and nothing more.

Hitman is a perfectionists dream and reading the environment and surrounding to time the perfect kill is insanely satisfying when you succeed but can be a bit frustrating when your perfect attempt goes out the window because of a minor mistake. That said, Hitman is without a doubt the best game of its type and any fan of the stealth genre owes themselves to try it out. Hitman is episodic and while not ideal at release it does ensure that for a small fee you can try out the first mission to see if it’s something you like.

Metal Gear remains one of the best gaming series of all time with an almost perfect record, and the fifth installment is likely the best of them all. Granted, Metal Gear Solid is not a full on stealth game, but an action-adventure stealth game but the quality of the stealth elements in this game justifies its spot on this list.

Taking place in Afghanistan in the 80s where you play as the legendary Big Boss and take on the Patriots Organization as you establish your army of mercenaries. While you can play this game as action-oriented as you wish it is clear that the developers put a lot of focus on the Stealth gameplay. With a ton of different ways to approach each mission and excellent gameplay and a killer story, this is the best open-world stealth game on the market.

The story can be slightly confusing at times if you haven’t played any of the previous games but a fast recap on Youtube will tell you the essentials, and it is in no means unplayable as a stand-alone title. If you love stealth games but also like a bit of variation in your approach, then Metal Gear Solid V is a must have.

Mark of the Ninja

Mark of the Ninja might be a bit old now, but that doesn’t really matter much when the art style is this timeless and the gameplay is as flawless as it is. Mark of the Ninja still stands out as the best stealth platformer in at least a decade and could easily be considered one of the best platformers of all time.

It is simple, smooth, and stays more true to the stealth genre than any other game on this list. Whether you choose to silently assassinate or sneak your way through the cleverly designed levels, you must make sure not to get caught. While most stealth games let you survive getting seen as you can just shoot your way through the guards, Mark of the Ninja is a lot less forgiving and thus, much more rewarding.

In this brilliant Platformer, you must use all the iconic tools of the Ninja to make your through the levels while you uncover the surprisingly deep and engaging story told in part with great cutscenes. Every fan of Platformers have to give this game a try, and even if you are usually turned off by Platformers, I do encourage you do give this masterpiece a shot.

Invisible, Inc. is an incredibly clever and unique take on the stealth genre that has an immense depth to it despite being very intuitive. The game is a turn-based tactical stealth game that rewards clever strategies and planning above all else. Despite being turn-based, Invisible, Inc. is surprisingly fast-paced as you race against the time to complete your objective.

Instead of the classic assassination gameplay we see in most stealth games Invisible, Inc. focuses on a more heist thief type gameplay which honestly is a much better fit this type of game. Invisible, Inc.’s biggest strength comes from the endless replayability that the randomly generated levels and a vast cast of characters with different skills offer. Hacking, hiding, sneaking and stealing is the name of the game in Invisible, Inc. and despite giving you the ability to rewind 1 turn a few times the game is incredibly challenging and completing missions to perfection is no picnic.

If you enjoy tactical affairs and stealth games then Invisible, Inc. is the best game on the market to scratch that itch. While the story is not going to win any awards on its own, the gameplay and mechanics of this game is utterly superb, and the tactical depth is also incredibly rewarding and makes for an almost endlessly replayable game.

Aragami is an extremely challenging, fast-paced, and rewarding stealth game where you play as Aragami, a supernatural ninja-like assassin that is enhanced by the shadows and weakened by light sources. The graphics are very stylized and easy on the eyes, and the gameplay is very smooth and certainly rewards skill, tactics, and precision.

Aragami is what hardcore stealth games used to be and if you get hit by anything you will die, meaning that avoiding detection is of the utmost importance. That urgency of not getting detected makes the moment-to-moment sneaking very adrenaline inducing and fun and also ensures that you feel a great deal of accomplishment when you succeed. The game also has a great skill tree with meaningful abilities that you unlock throughout the game and most of them really help switch up the gameplay and keep the game interesting.

Aragami is a strong enough stealth game on its own, but you can also play the campaign in multiplayer which makes the game even more enjoyable than it already is. If you tend to get really angry when dying in video games then Aragami is likely not for you, but if you are looking for a thrilling stealth adventure with challenging gameplay, then this game is a great pick for you, especially if you also have a friend to play with.

Although it has been a very long time since we got a new Splinter Cell Game, it is still one of the most iconic stealth game series on the market and Splinter Cell: Blacklist is one of the best. You play as Sam Fisher, a veteran special-ops soldier that ones again has to step up and save the day.

Splinter Cell is a stealth game through and through and getting spotted or seen will put you in a lot of danger and for the most part, it will likely be your death. Completing missions without being detected is so incredibly satisfying because you know the stakes are high and the danger of getting spotted give most tasks a thrill that very few games today can provide.

2014’s Thief was a disappointment to many due to the flat story, somewhat boring main character and sometimes questionable gameplay decisions. However, Thief is still a very good stealth game with various fun and challenging missions to go through. Thief is by no means a perfect game, but for hardcore fans of the stealth genre, it still has a lot to offer.

The game takes place in a city covered in darkness and mist, making it any stealth assassins dream and the atmosphere is pretty awesome. Most missions have a lot of different ways you can approach them and whether you want to sneak past, knock out or kill guards is for the most part up to you.

If you are a big fan of the classic stealth genre, then Thief is still a great game to play through, but I wouldn’t recommend it if you are looking to dip your toes in the stealth genre as the overall gameplay can be a bit clunky, and the story is not worth it on its own.