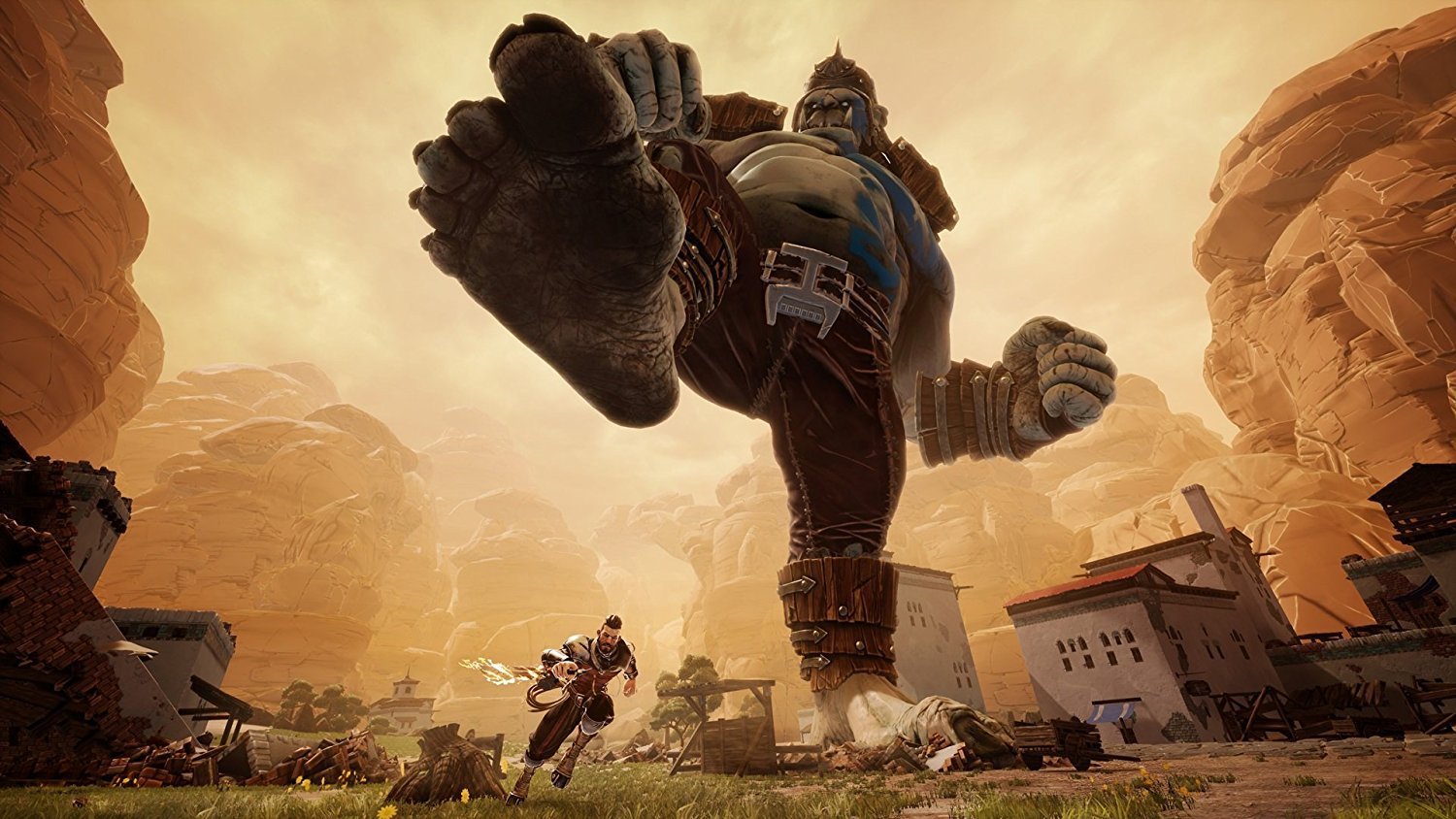 I was expecting more from a game with such an evocative title like Extinction. The game struggles tooth and nail to give you any actual substance, instead, it offers a rinse and repeat type gameplay, which doesn’t justify a full game release. Especially with its £60 deluxe edition and £46 standard edition price tag and its concept being executed better by a few other games, like Attack on Titan and Shadow of the Colossus.

Before we continue, Extinction is an action-platformer clearly influenced by the games previously mentioned. Set in medieval or Egyptian era world–which you get small glimpses of as you jump around the cities that you are there to protect from huge, teleporting ogres or “Ravenii” as they are so called in the game. These hulking moving mountains will demolish the entire city in moments unless you stop them. You play as a magical warrior called a sentinel that is believed to be a myth, which you learn through sparse 2D animated cutscenes, which grants you the ability to run up the backs of the speechless Ravenii and cut off their heads.

Chopping the heads off the colossus creatures seems to be the only perk that extinction offers the player in the way of excitement, but even this disappears as quickly as the settlements you protect through the game. That being said, you don’t just go right into slicing and dicing the heads off the Ravenii, you have to charge up your rune meter to gain the ability to decapitate the hulking beasts. This means running around the repetitive city landscapes, killing meaningless man-sized monsters attacking the cities civilians by button bashing the square button, failing this you can also teleport the surviving civilians to safety which are standing around large crystals in groups just begging for you to attack them out of pure boredom. While you run around charging your meter to perform the repetitive killing blows, you also have to complete a set number of tasks before the Ravenii destroy too much of the city, which seems to be the only way to fail a mission.

The choice between stopping the Ravenii from destroying the city or protecting the civilians would be more strenuous if Extinction wanted you to make those kinds of tough decisions, instead leaving most of the civilians to their fates at the hands of the man-size meanies just means it will take you longer to charge your killing blows, making this aspect of defending and saving the civilians a hassle more than anything. As long as you rescue the required amount of people needed to complete that part of the mission the rest are disposable.

Now Back to killing the Ravenii, Decapitating the brutes are simple “camera angle allowing” to do by repeating the same technique for each Ravenii, the only difference is the armor that they wear if any. Initially, I thought that this was going to be how Extinction was going to give the player complexity and variety in the head lopping, but I was wrong. The only real difference to the between the wooden, iron and gold armors is the increased weak points and the thorn armor damages you if you hit anything other than the weak point. The only real challenging piece of equipment that the Ravenii can have is the spiked armor, where you have to ask the Ravenii nicely enough to smash it off themselves while they throw their thundering limbs at you, this along with the frustrating AI and terrible camera make the whole process even more excruciating.

Sadly, it doesn’t really get any better either, the act of dismembering and decapitating the towering titans looks fantastic in its own right but isn’t that satisfying when its all said and done, especially after the first few times. All the spark, blood and speed of the action just feels weightless and dull. The massive monster just disappears in a fancy flame like a spiral into nothingness, as if they weren’t there in the first place. As you repeat this process over and over again, it makes Extinctions Hiccup’s even more noticeable and noticeable. Such as grappling your way up the side of a mountain to try and save the required amount of civilian and you might end up inside the rocks at the top with no way of getting out. Another glitch comes when you try to aim for weak points on the Ravenii’s armor just for it to appear inside the bodies of the beasts, making it impossible to hit.

The real irritating thing is the camera. You are there poised to deliver that final strike and realizing the game’s camera won’t allow you a direct enough gaze. So you fall back to the ground just to run back up the Ravenii’s hoping with your fingers crossed that the same thing doesn’t happen again. Even throwing yourself up the Ravenii’s back can sometimes be challenging for the camera, as I have on occasion launched myself into the limbs and armpits of the beasts, just for me to repeat the process all over again.

Extinction also offers one other experience in its survival mode, along with daily challenges that randomize your encounters with the Ravenii, just in case completing the same objectives (rescue civilian, kill the Ravenii) across the same handful of maps as the campaign isn’t enough for you.

The extinction of any real story and purpose

I reached a point while playing through the game, where I found myself having to force myself through the game, especially after a handful of missions where the Ravenii spawned on specific mission-critical buildings, ending the mission before I had a chance to do anything at all.

Various glitches and bugs along with the rinse and repeat nature of the games primary missions that at best took me 3-4 hours to complete was still far too long and fun moments were rare and far between.

All this makes Extinction feel thin and poorly executed. Its concept of a mythical warrior hacking down giants sounds fun but ultimately falls short. It has been done before in much better ways in games such as Shadow of the Colossus. Extinction has an overall lack of story, variety, and impact throughout the entirety of the game.

Launching yourself around the landscape and up the Ravenii, just to disappointingly end up inside a rock, building or crashing face first into the monsters themselves. Only to fall ungracefully down to the ground and repeat the effort.
Verdict: Extinction is poorly executed idea that repeats itself over and over again. Avoid it or better yet buy it in the sales for someone you don’t like.