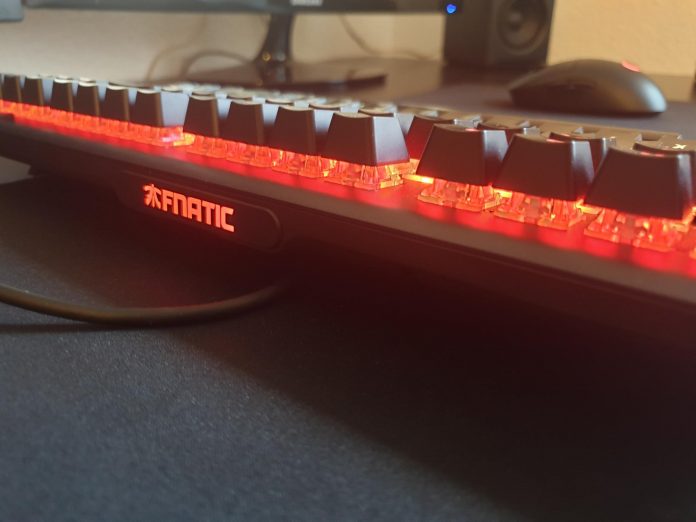 -Fnatic has finally created a piece of gaming equipment worthy of their Esports legacy. The Fnatic Streak & miniStreak is one of the most capable mechanical keyboards for competitive gaming on the market today.

Fnatic is a common name among serious gamers for their esports teams and competitive leagues.

While their contribution to the professional gaming world is undeniable, they aren’t always as dependable with the gaming accessories they produce. For example, I think the Clutch G1 gaming mouse they came up with last year was a huge disappointment.

But they seem to have turned things around and with their mechanical keyboard line – the Fnatic STREAK & miniSTREAK RGB. Testing these were a real pleasure, and the miniStreak has remained in my own personal gaming setup.

The Streak series offers everything you might want from a mechanical keyboard. Exceptional responsiveness, top-tier comfort, and overall high-end performance that is certain to boost your own in-game capabilities.

What’s the difference between the STREAK and the miniSTREAK?

The most significant difference between the two is that the STREAK is a full keyboard while the miniSTREAK does not have the number pad on the right. That is why it’s called the miniSTREAK.

Another difference is that the STREAK has a USB passthrough port in it, which allows you to connect another USB device to the keyboard. The STREAK is also equipped with a volume adjustment but other than that they are the same. It really comes down to whether you want a full size or a compact keyboard.

All of Fnatic’s gaming accessories are made by Func, the Swedish company who was recently acquired by Fnatic. They have a reputation for creating minimalist yet elegant hardware.

The keyboard has rounded off corners, and the chassis is made of a dark-grey aluminum. The design itself doesn’t have anything special which will turn a lot of heads, but it definitely feels high-end and qualitative.

Because of that, this keyboard is totally fit to be taken to the office as long as you keep the RGB lights off. You’ll also want to remove the rather flashy magnetic signature plate with the Fnatic logo on it. Fnatic promises they will come up with customized plates in the future.

The Lights: As Customizable as it Gets

Let’s be straight here. You wouldn’t want to buy this one unless you liked playing with lights. The simplistic design complimented by the RGB lighting makes it a beautiful addition to any gaming set up.

It has 8 different lighting modes – Rainbow Wave, Reactive typing, Single color or gradient and many more. You can switch and flick through these different schemes by merely pressing a hotkey on the keyboard. Rest assured, with all the different modes available, you’re not going to get bored anytime soon. I don’t.

You can customize it even further if you install the Fnatic OP Early Access software. This software is fairly intuitive and simple enough to use. It lets you customize your lighting system and it also lets you rebind keys any way you want.

Hot Keys: The Usual And a little more

The function keys double as hotkeys just like everybody else. However, what’s strange is that the function key numbering is not on top of the keys but on the underside of the key, facing you.

There is a button for function lock. You can disable it and then your function keys will work in the usual fashion, from F1 to F12. Enabling it lets you use the secondary keys.

The secondary commands include six macro keys, dynamic lighting adjustment, a window preview key, and three media keys (Back, Play/Pause, Forward). The macro keys can be programmed using the Fnatic software, or if you want to avoid that hassle, you can just hold down the Competition mode key.

You’ve probably seen Competition mode keys on Razer or other gaming keyboards – what this does, is it disables the Windows key, and it dims the backlighting while changing the color scheme from the default rainbow scheme to a more suitable, static orange.

There are also a few dedicated media keys at the top-right section of the keyboard. There is a small volume wheel as well. What’s most useful is that there are controls which let you quickly mute or unmute normal audio and mic audio. This seems tailor-made for esports teams and is definitely going to come in handy if you play a lot of multiplayer.

Fnatic Streak uses real, genuine Cherry MX keys just like advertised. This puts it in a small group of companies who still use the real deal and not cheap, china knockoffs. Check out our guide to mechanical switches if you need an overview.

You have several choices from Brown, Blue, Red or Silent Red. I got myself the blue ones, which are very tactile and you really feel every click when pressing buttons. This is my favorite configuration, but you can get the more linear and silent red or the ‘bumpy’ browns as well.

The keys are very responsive, and I didn’t face any issues with missed or delayed, and I was definitely mashing them quite a lot playing Overwatch. I did have an issue with the half-sized shift button though. I wasn’t used to it, and I ended up missing it several times while playing. However, that is mostly a matter of getting used to the layout of the keyboard.

Then there’s the wrist rest. It looks pretty small at first, only about 2 inches. Now I’ve got big wrists, and I was definitely setting myself up for disappointment. However, I was in for a surprise when I set it up.

There’s quite a bit of engineering ingenuity involved here because the wrist rest is actually two pieces. It has a metal backplate, which attaches it to the keyboard. However, the padded top portion can be lifted off and then placed in three different positions. It’s not that plush, but it is comfortable.

It seems that no matter how long my gaming sessions get I don’t feel any discomfort using the Fnatic Streak.

The second-generation Fnatic Streak totally exceeded all of my expectations, and definitely gets my seal of approval. I’ll also keep an eye out for all future products from Fnatic.

It comes with full RGB lighting, most of which can be adjusted through the hardware itself and real Cherry MX keys. The design is slim and lightweight, yet it is sturdy, and the anodized top metal plate makes it look really sophisticated.

What really seals the deal though is the quality and value for money. The Streak is reasonably priced and has a performance that can compete with the best of them.

If you want a simplistic keyboard with sufficient flash and high-end performance then the Fnatic Streak is a great pick. While I personally prefer the compact design of the miniStreak, both fantastic options.