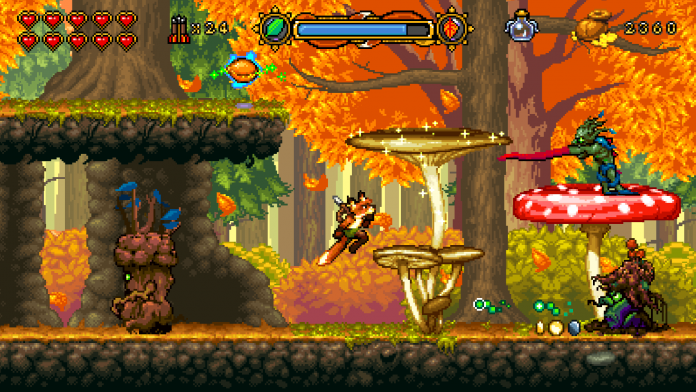 Fox N Forests is new fast-paced platformer game inspired by old-school retro video games. The 16-bit title, developed by Bonus Level Entertainment and Independent Arts Software is getting closer to completion, according to teams working on the project.

Fox N Forests actually started out as a Kickstarter project back in 2016 and managed to raise enough money to fully commit to the development. Much to the awe of fans of the retro platformer genre.

In Fox N Forests, gamers play as a fox named Rick, a hero who uses his magical crossbow to navigate and adventure through dangerous worlds. Throughout the game, players will battle epic bosses, and unravel plenty of secrets. Some of the powers Rick’s crossbow has included the ability to freeze water around him, create platforms out of leaves, and so much more. Gamers will be put to the challenge by battling unique enemies, solving puzzles, and confronting terrifying bosses.

According to developers, Fox N Forests was inspired by many classic games including the Legend of Zelda, Mario, Sonic and other NES titles. This means that gamers who find classic retro NES platformers entertaining are likely to adore Fox N Forests. Especially since the new title was influenced profoundly by modern gameplay and 16-bit graphics, this title 16-bit title creates a world of fun.

They announced that Fox n Forests releases on the Xbox One, PlayStation 4, Nintendo Switch, Microsoft Windows and Linux platforms. The pricing still hasn’t been announced, but I would be surprised if it is not in the more affordable price range.
The game is set to release on May 17 and to celebrate the release date announcement, Bonus Level Entertainment and Independent Arts Software released a new trailer, demonstrating fresh gameplay footage.