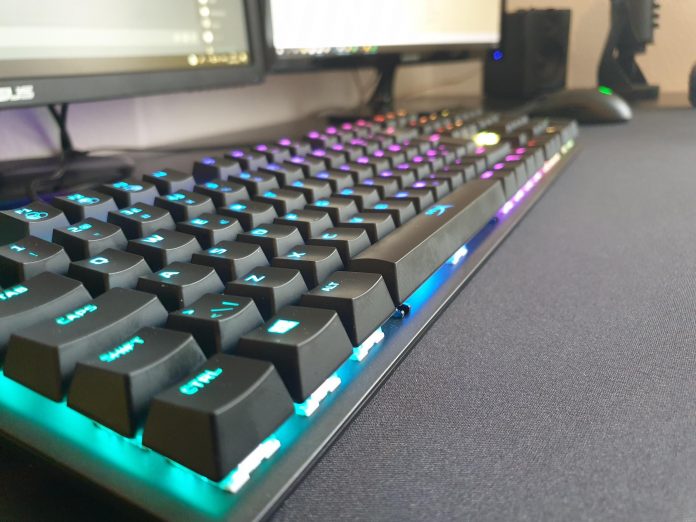 -The HyperX Alloy FPS puts competitive performance above all with its Silver Speed switches, and although it might not be the most comfortable keyboard on the market, it’s powerful performance is undeniable.

It’s clear right away, when you test the Alloy FPS RGB, what HyperX intentions were with this keyboard. It’s Kailh Silver Speed mechanical switches is incredibly fast and it’s responsiveness puts most good mechanical keyboards to shame. So if you focus purely on competitive performance then it is a clear 10 out of 10 and especially if you enjoy FPS gaming at a high level then the HyperX Alloy FPS RGB is a powerful tool to have at your disposal.

However, it’s hyper-sensitive keys and competitive nature also mean that this keyboard isn’t for everyone, and that is okay.

Casual gamers that enjoy playing a few hours a week or perhaps don’t enjoy player-versus-player ranked play will likely find the Alloy FPS RGB rather hard to utilize correctly and maybe even find the sensitivity annoying. It is also not the best writing keyboard as it is very easy to misclick one of the buttons when typing.

Nevertheless, it wasn’t made for typing. This keyboard is for Esport fanatics and high-end players that enjoy competing at the highest level, and for that, it is among the best.

The design looks great and is very compact, considering the 104-key layout. The entire keyboard is built with a solid steel frame that makes it feel incredibly qualitative, and the weight eliminates any slippery issues that some keyboards may have.

My biggest gripe with the design is the lack of any wrist rest or alternative support. It is not uncomfortable to use, but you will likely feel some fatigue during very long gaming sessions.

Despite its flaws, HyperX has succeeded in what they set out to do with the Alloy FPS RGB, which is creating a keyboard that provides high-end gamers with a competitive edge over their opponents and allows them to perform at the highest level. I wouldn’t recommend it for casual players or people that mostly play singleplayer games, but it can be great for anyone that enjoy player-versus-player games, and for FPS games it is especially great.

Every aspect of the HyperX Alloy FPS RGB keyboard is tuned towards optimal gaming performance, and that also goes for the design where comfort takes a backseat to the competitive layout.

That is not to say that it isn’t decently comfortable to use, it’s just not on par with keyboards that have a significant focus on comforts such as the Fnatic Streak or the Razer Blackwidow with their larger design and wrist rests.

With the HyperX Alloy FPS, you don’t get a wrist rest, and the sensitivity of the buttons forces your hand to be more activated than usual since you cannot rest on the keyboard to the same degree. You usually won’t notice any issues, but if you play vigorously for eight or more hours, you will probably start feeling a bit of fatigue.

However, the fact that your wrist and hand have to stay more activated does turn into a competitive advantage and will ultimately improve your performance since your most important joints remain active at all time while playing.

The Silver Speed mechanical switches lay on top off a solid steel frame that gives the keyboard a lot of weight to it and makes it ooze with a sense of quality. On top of that, it also means that the keyboard is steadfast even on the most slippery surfaces which save you from having to relocate your keyboard continually.

For the switches themselves, they have been tested to endure up to 70 million keystrokes which make them some of the more durable switches on the market.

All and all this keyboard is slightly above what you might expect from this price range in terms of quality and will last for many years with proper care.

The star of the show is the Kailh Silver Speed mechanical switches as it makes it faster and more responsive than almost any other keyboard out there.

So what makes the Kailh Silver Speed switches so special?

They have a small actuation point of 1.1mm where 2mm is considered the standard. It also has a quite low operation force of 40g and a shorter travel distance. All of this, alongside a quick report rate, means that your clicks will register faster and that your PC will register it instantaneously which is where the competitive advantage comes from. You can read our guide to mechanical switches for comparison.

The actuation point also means that the keys are incredibly sensitive, which can take some time getting used to and might cause you to miss your clicks quite a lot at first. This keyboard is hard to tame but once you do you will have unparalleled speed at your disposal, and it will almost certainly improve your in-game performance and help you climb the ranked ladder in whatever game you play.

This keyboard was designed to help you conquer your foes in competitive player-versus-player games but is not ideal for out-of-game use such as writing. So if you are a student, blogger, or something else that require an extensive amount of typing, then this is probably not the best option for you. That said, you can learn to master it just as with gaming, but since writing, in general, require a lot more different keys than gaming it is a bit tougher, but it can allow you to write incredibly fast once you get the hang of it.

The HyperX Alloy FPS RGB works perfectly fine as a plug-and-play option, but it does have a few customization options if you want to mess around with it.

It uses the NGenuity software for customization and configuration of the keyboard. It is not the most extensive one out there, but it is very user-friendly and straightforward to use.

With it installed, you can create custom macro keys, adjust the lighting in any color you want, and change the RGB pattern. You can also create custom game modes which might involve dimmed lighting and disabling some keys.

The customization is what I would expect from a quality keyboard, nothing more, nothing less. While I prefer just to use the basic settings and not play around too much with the software, it is always nice that the option is there.

The HyperX Alloy FPS RGB is not very versatile in its uses, but what it does well, which is competitive gaming, it does brilliantly. It takes some time getting used to the hyper-sensitive switches, but once you do it will surely improve your gaming performance and give you an edge over your competitors.

The quality is top-notch, and while I would have liked a wrist rest option, I did enjoy the overall design.

This keyboard is excellent for players that want to climb the ladder in CS:GO, League of Legends, or any other highly competitive game but not ideal for casual gaming. I recommend it to players that mainly focus on player-versus-player games and first-person shooters in particular.