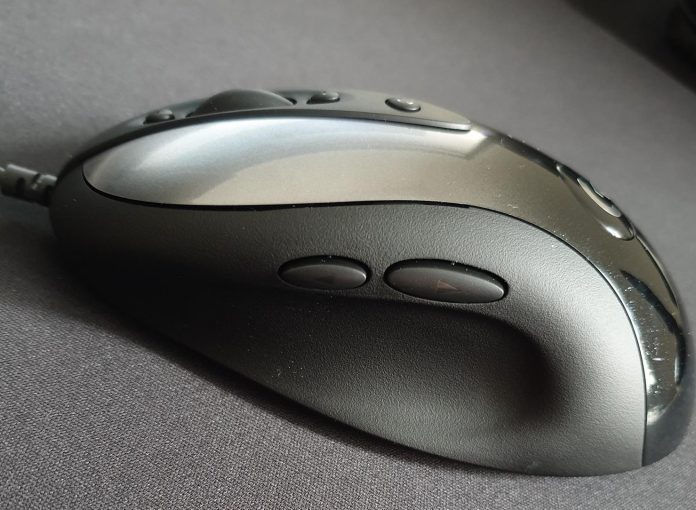 -The MX518 Legendary is a brilliant remaster of the old beloved classic. Equipped with cutting-edge modern specifications, it brings the best of the old and new together in perfect harmony.

Fans have requested that Logitech bring back the legendary MX518 from 2005 for years now. Celebrated for its incredibly ergonomic design that a lot of people will argue have not been outdone since. For its time it also had admirable tracking and perfectly placed thumb-buttons, before that sort of thing was normal. In other words, the MX518 was groundbreaking for its time and has been the source of inspiration for countless gaming mice since.

The MX518 Legendary is like a refurbished 1969 Ford Mustang. It uses the same, strong design as the original but it is also fully equipped with all Logitech’s latest, cutting-edge specifications and technology.

This mouse might have been initially created for fans of the old classic, but it is honestly one of the best gaming mice the market has to offer right now. This might come off as me being ”nostalgic” but honestly the design is just that good and all the raw power that the new version possesses makes it competitive with even the most high-end gaming mice right now.

The MX518 is the perfect plug-and-play gaming mouse. Although you can reprogram a few buttons through the G HUB software, the mouse is in full gear the second you plug it in, and it has no LED lighting or other features that need adjustment. It is well suited for all gaming genres, whether it be casual adventuring in MMORPGs or high-paced competitive gaming in CS:GO or League of Legends.

Apart from the modern Logitech G logo, the MX518 Legendary is a faithful recreation of the beloved mouse from 2005, a design that remains one of the most comfortable and ergonomically brilliant to this day.

The design is simple, with two conveniently placed thumb buttons on the left side of the mouse, a quality mouse wheel and DPI adjustment buttons. Although this might seem bareboned if you are used to modern feature-rich mice, this is all you need really.

However, I will admit that I, at times, missed having two buttons on the right side as we see with most modern gaming mice.

The bottom is equipped with new skates and with a meager weight of 101g, it slides effortlessly over most surfaces and is well suited for high-paced video games.

If you are a fan of LED lighting, FPS-buttons, and other modern gaming mouse features, then this mouse is not really for you. However, if you want a powerful, plug-and-play mouse with a simple, yet comfortable design, then you would be hard-pressed to find a better candidate.

Seeing as a lot of gamers are still using their 2005 MX518 to this day, the quality speaks for itself.

The new version feels just as strong and durable as the old version and has even been tested for up to 20 million clicks. So just like the 2005 version, the MX518 Legendary are sure to serve you faithfully for many years to come.

The exterior might be mostly unchanged since 2005, but the same cannot be said for the interior, and I love it.

MX518 Legendary comes fully equipped with Zero-smoothing & acceleration, a DPI range of 100-16.000, a stunning report rate of 1ms, and a max speed of 400IPS. All made possible with the new Logitech Hero 16K sensor, which is the same sensor used in the G Pro Wireless, one of the most popular mice among professional gamers right now.

I did most of my testing in competitive games such as Counter-Strike: Global Offensive and League of Legends and the MX518 handled it really well.

The DPI adjustment buttons on the top of the mouse are great for adjusting the mouse speed on the fly and lets you flip between five different DPI values. This is great if you, like me, like to use separate mouse speeds for Snipers and riffles in a game like CS:GO.

The lightweight design and high-end specifications create an incredibly smooth gaming experience, and the mouse slides seamlessly across the surface without any resistance. So, even though the mouse is from a simpler time where competitive performance was not as important as it is today, the MX518 Legendary more than holds its own in even the most competitive games.

In the end, the MX518 is just an incredible all-around PC gaming mouse that will work for pretty much any genre and any level of play.

With Logitech’s recent strives in wireless gaming, I would have liked to see a wireless version as it is a bit rough to go from the G Pro Wireless to this one. Logitech makes the best wireless mice on the entire market, in my opinion, and having a wireless option would be great.

I consider the MX518 Legendary to be the perfect plug-and-play mouse and thus don’t think the software implementation was vital. However, it never hurts to have the options.

The MX518 has no RGB lighting, so the only thing you can customize macro buttons and commands. The mouse can store up to 5 different profiles which give you the option to have a profile for most major game genres.

You can customize the mouse with either LGS or G HUB. Both of which are original Logitech software, so the difference between the two is minimal.

I would recommend the G MX518 Legendary to pretty much any gamer that is looking for a mighty plug-and-play mouse. The comfortable and simple design makes it great for casual and singleplayer gaming, while it’s cutting-edge performance makes it a great option in even the most intense, high-paced competitive games.

Apart from a few minor personal gripes like the mouse not having the right-side buttons and not providing a wireless version, I’d say the G MX518 is a home run from Logitech. Mind you; I don’t think they should have added right side buttons just because I usually use them; it is much better they chose to stay true to the original design.

In 2005 the MX518 was, in my opinion, the best mouse on the market and with its re-release in 2019 it remains one of the best options out there.