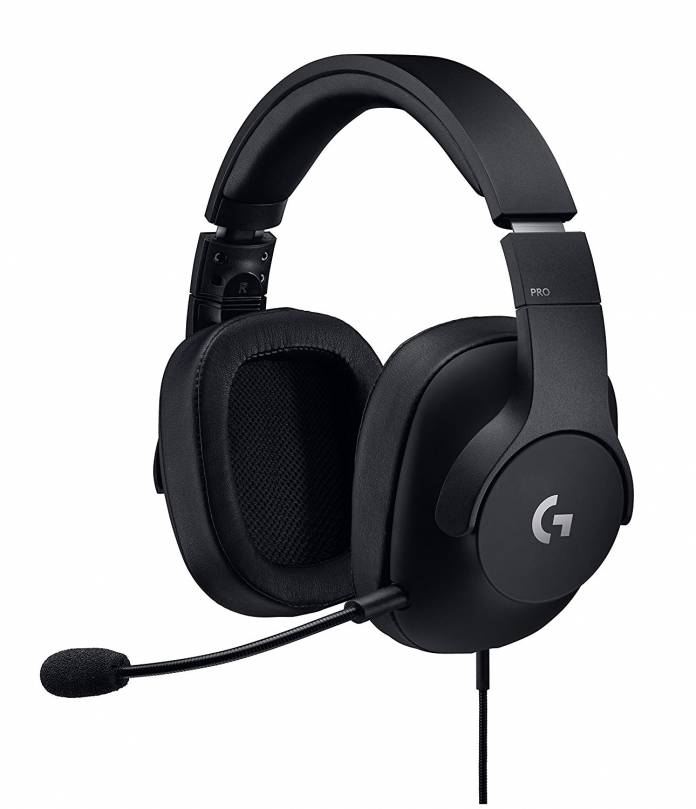 Logitech’s goal of creating a professional grade esport headset for the everyday gamer is honorable but not entirely successful. The Logitech G Pro gaming headset offers exceptionally clear audio but lacks some basic features such as surround sound.

The G Pro headset looks incredible, and its slick simplistic design makes it look very professional, and its lightweight over-ear design makes it comfortable to wear for extended periods of time.

The disappointment comes with the lack of surround sound which will likely be a deal breaker for most. When you look at some of its competitors in the same price range such as the Hyper X Cloud 2 or even Logitech’s own G433, it is hard to understand why they decided to remove the surround sound feature. That said, it’s G Pro driver provide you with sound quality and precision that is up there with the very best and is why it still works great in a competitive environment.

I would recommend the Logitech G Pro headset to gamers that care more about performance and precision than immersion. The lack of surround sound definitely take a crucial aspect away from the casual gamer, but if you care only for your in-game performance and just want the essential sounds delivered with clarity, then the G Pro is one of the best.

Most products in the Logitech G Pro series get the most high-end technology they have to offer. A good example would be the brand new G Pro Wireless mouse. However, with the G Pro Headset, it seems that Logitech aimed to make it affordable and accessible to the regular gamer. Which is a noble intention but in this case it comes at the expense of its performance and overall audio experience.

The first thing I noticed was, of course, the lack of surround sound which seems like such a weird choice by Logitech as it puts them behind almost every other headset of that price class and even behind Logitech’s own, slightly cheaper G433. The lack of surround sound was something I noticed while testing it and I cannot claim that it didn’t bug me, but I understand what they were going for.

After a few hours of testing, it became clear why Logitech chose not to add surround sound to the G Pro headset. The audio quality of the stereo drivers is undeniable, and every sound is apparent to the point where you won’t miss a single important ping or in-game notification. In other words, Logitech chose to remove the surround sound to cut out the noise and make the headset purely focused on performance and clarity for the player.

So, did it pay off? Well, that depends on what games you play.

In games where the directional sound is a necessity such as in first-person shooters, I missed the surround sound feature as it can be incredibly useful for locating the enemy. That’s not to say that there is no directional sound in the G Pro and for a stereo headset it does a fantastic job of informing you of enemy player’s location. However, if you play games such as League of Legends or Dota 2 the G Pro headset is suddenly one of the best ones out there, assuming you prioritize performance over all else. Very few headsets will do as good a job at providing you with clear intel as this one.

So to sum it up, the G Pro headset is quite excellent regarding the actual quality of the sound, and the G Pro drivers provide you with some of the clearest audio on the market. That said the lack of surround sound is ultimately a let down for first-person shooter players and if you mainly play Overwatch or CS:GO I would recommend something like the Hyper X Cloud 2 instead. However, if you primarily focus on League of Legends or World of Warcraft where clarity is the most critical factor, then this headset is a fantastic pick for you.

I would have preferred it if Logitech had added surround sound and just make it easy to toggle on and off like on the Hyper X Cloud 2. That way it would have catered to any competitive gamer, and instead, we are left with a standard headset for shooters that has extraordinary performance in MOBA’s.

On paper the detachable microphone for the G Pro headset is excellent and once you have found the perfect sweet spot it does work very well.

My gripe is with the default volume and sound settings as the headset is incredibly sensitive and can easily hurt your teammates’ ears if you accidentally keep it too close to your mouth. This is not a big deal once you fiddle around with the settings a bit as the microphone sound quality itself is very clear once you find the perfect setting for you.

The material quality is very good, and I love how easy it is to detach and adjust to fit the individual player.

This is where the G Pro headset starts to come around and genuinely feel like a pro-grade gaming headset.

Its build for professional gamers and while that isn’t always clear it is when it comes to the overall build. It’s lightweight materials, and leatherette ear pads make it comfortable to wear even for hours on end. Which means you can practice with your team or friends all day long and feel little to no fatigue from it which is a definite plus.

The headset uses an over-ear design which I think was a good move by Logitech as it is much more comfortable for extended gaming sessions. The cups are leatherette, but it also comes with a micro-suede ear pads option if leatherette is not really for you. However, I preferred the default cups.

Concerning looks, it is usually hard to beat the G Pro series, and this headset is no different. It has a slick, simplistic, and yet very professional look that lives up to its name. It does not have LED lighting which I think is okay as it rarely makes sense to put in a headset, but it might be a deal breaker if you put a lot of work into synchronizing your gaming set up with RGP lights.

We have gone over how it performs, how it looks, and how it feels. Now let us take a look at what kind of hardware the G Pro is packing.

First off, and most importantly, the headset uses the signature G Pro Logitech driver which is without a doubt an incredibly efficient driver. It is one of the best on the market regarding sheer sound quality and especially in regards to clarity. Which is why I’d argue the G Pro gets away with not having surround sound relatively well, you might not have that full 360-degree immersion, but in regards to hearing specific in-game sounds with absolute certainty, it is excellent.
It has a detachable wide frequency microphone which is very handy in that it is fully adjustable and can even be detached if you find it annoying or want to use a stand-alone microphone. That said I do find it overly sensitive which can prove very annoying, but once you get the setting right and get used to it, it works perfectly fine. Just don’t keep it too close to your mouth as it is also good at picking up breathing sounds and your teammates will hate you for it.
The G Pro headset does not have surround sound by default, and I think this is the biggest issue with the headset right now. As some of Logitech’s headsets and most of the G Pro’s competitors does as well. That said it is compatible with surround sound software so if you use Windows Sonic and Dolby Atmos you can obtain virtual surround sound which is at least something but I would have preferred if it was just a baseline feature.
It is cross-platform compatible, meaning you can use it on PC, Xbox, PlayStation and anything else. While most people looking for a pro gaming headset will likely be PC gamers, it is always nice to know you can hook it up to your console if you feel like it.