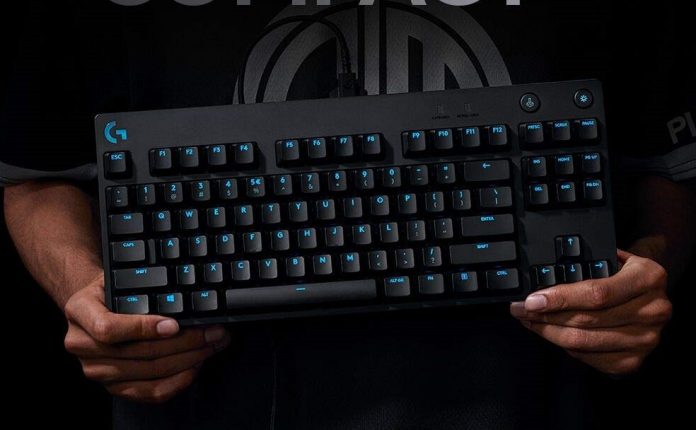 -The Logitech G Pro Keyboard is the perfect example of what a competitive tournament-grade board should be – Compact, comfortable, with extraordinary performance. It’s tenkeyless design & highly responsive switches make it an excellent choice for gamers that want to perform at the highest level.

Once you get your hands on it, it is quite clear what Logitech wanted to achieve with the G Pro Keyboard. It is a simple, yet powerful gaming keyboard designed for those that put performance above all else. It has been stripped of all the non-essentials and what you are left with is one of the best competitive mechanical keyboards on the market.

This type of keyboard has its pros and cons and is not for everybody. If you love feature-rich, gimmicky gaming products, then this is certainly not it. It has no media control center and no additional macro keys. It is a simple keyboard made for competitive play.

The G Pro keyboard is for those that don’t care about all the extra whistles and bells and just want to perform at their absolute best. And the G Pro certainly enables that.

It uses the GX mechanical switches, which are still among my favorite switches on the market. They are very responsive without being overly sensitive, like many other competitive boards on the market like the HyperX Alloy or the Huntsman TE. This means it is also a great keyboard for the more casual player that wants to improve as you won’t constantly misclick due to the sensitivity. That said, high-end players that are used to that increased sensitivity might not like the more normalized actuation point of the GX switches.

In terms of design and quality, it is what I’d expect from Logitech, which is a good thing. They haven’t innovated on anything with the G Pro, but its design is tried and tested. Its compact tenkeyless design makes it great for tournament play or if you want the extra space.

In conclusion – The G Pro Keyboard is a fantastic choice for gamers that seek to improve and enhance their gaming experience. It is engineered specifically for high-end competitive play, and it is no wonder that professional players like Hamlinz, Profit, and many more are using it.

There is beauty in simplicity, and that is precisely the philosophy that the Logitech G Pro is designed with. Instead of having every cutting-edge feature available, it has been stripped down to the bare essentials, and while some people might dislike that, it makes it ideal for competitive play.

The compact tenkeyless design gives you more space on your desk and allows you to have your mouse and keyboard closer to each other.

While it is light on features, it does still offer RGB LED lighting and full customization through the G Hub software. The software also allows you to make adjustments to the keys on a macro level.

Quality – Sturdy, but nothing extraordinary

The G Pro Keyboard does in no way feel cheap, but its design quality is nothing out of the ordinary either. It is built almost entirely of hardened plastic, and while it gets the job done, it doesn’t take your breath away like the G915.

That said, it’s base has a good amount of weight to which does give it a certain quality feel while also making it hard to move it while playing accidentally.

Performance – Among the Best

The performance of a mechanical keyboard is only as good as the switches it uses. Luckily, the GX is some of the most comfortable and responsive mechanical switches on the market. They come in three variants – The GX Blue Clicky, GX Red Linear, and the GX Brown Tactile. This review is based on the Red Linear switches, which is the quiet and smooth variant.

The GX switches are Logitech’s competitive switches and feel very close to the standard Cherry MX keys that most high-end mechanical keyboards use. However, compared to most other competitive switches, it has a slightly higher actuation point of 1.9-2mm, which is something I personally prefer. That said, if you are used to extremely sensitive switches, then the GX keys might feel a bit unresponsive. Some high-end competitive players will undoubtedly prefer the more sensitive option, but I’d dare say that the 2mm actuation point is ideal for most gamers. It eliminates most misclicks and ghosting while still feeling quick and responsive.

The GX Switches is entirely engineered by Logitech themselves and are only found in their products. However, the truth is that they feel remarkably close to the classic Cherry MX keys, which is excellent. Comparing the GX Red to the Cherry MX Red is like comparing twins in most regards. Everything from the actuation force, travel distance, and general feel are more or less the same with minor differences such as a 0.1mm shorter actuation point on the GX switches.

Needless to say, most gamers will not feel a difference between the two, and if you are a fan of Cherry MX, then you will also love the Logitech GX switches.

This review is based on the G Pro X version of the keyboard, but the only real difference between the two is the easily swappable keys. Meaning that with the G Pro X, you can freely replace and swap out the different keys, provided you buy additional GX keys on the side. This is for those that want specific keys to be Clicky, others to be quiet, and so on.

If you want a highly customized set up, then I do highly recommend the G Pro X, but for most gamers, the G Pro is just as good.

Logitech has made many highly competitive keyboards over the years, such as the G513. However, the G Pro is, in my opinion, the Logitech keyboard that best embodies what a competitive tournament board should be.

Its design and performance is very simple, yet effective and is hands down one of my favorite tenkeyless boards to date.