It is not a coincidence that the G Pro remains popular for a lot of high-end gamers. Designed in correlation with several professional gamers around the world we are taking a look at what makes it such an attractive mouse for competitive gaming.

On the surface, the G Pro has a very simplistic design and looks identical to the much cheaper G203 but don’t let that fool you. Once you get a look at what the G Pro is hiding under the hood, it becomes quite clear that it is anything but an entry-level mouse. It is sporting all of the most advanced Logitech technology which is beautifully combined with its lightweight ambidextrous design to create one of the smoothest gaming experiences on the market.

It uses the brand new Hero sensor which is capable of just about anything, whether you prefer a regular resolution of around 1-2k DPI or have super powers and need 16k the Hero sensor is customizable to suit just about anyone. However, more importantly, it performs with zero filtering, smoothing and acceleration and has a one millisecond response time which makes it incredibly smooth to use. To top it all off, it also has a metal spring tensioning system that creates a pseudo mechanical button performance which is designed to increase the reliability of your clicks and overall precision and eliminate misclicks.

Professional gamers are looking for speed, precision with a lightweight design and the G Pro does indeed put all of this together into a very seamless experience. I would recommend the G Pro to anyone looking for pure performance and especially those looking to gain an edge over their opponents when gaming.

An in-depth look at the G Pro

The G Pro offers one of the most optimized experiences for competitive gaming on the market with a perfect blend of high-end specifications and a smooth lightweight design.

Made with Pros – For Pros

After a few hours of high-paced competitive play in both League of Legends and Overwatch, it became clear to me why the Logitech G Pro is such a favorite among the professionals. It is not just that it has incredibly powerful specifications but its the fact that it is so perfectly optimized for performance.

Allow me to elaborate. The design is quite small, ambidextrous and very lightweight. This makes it perfect for the sort of tight grip that enables professional gamers to move the mouse with high speed and precision. This is then combined with some of the most potent gaming technology in the world and more importantly, specifications that focus on accuracy and speed. The zero filtering, acceleration and smoothing together with its 1-millisecond response rate and lightning fast sensor creates one of the most well-optimized gaming mice on the market today.

Some gamers might find it a tad too small for them, but it is no accident that it is smaller than your regular gaming mouse, it is precisely one of the reasons it is such a hit among professionals. However, if you are used to mice like the G502 or the Razer Deathadder, it might take a little time getting used to the size.

Despite having a very simplistic look, the G Pro has some of the best looking RGB lightings of any Logitech mice. Usually, they make the classic LED G logo, and that is it, but the G Pro has a stylish line that goes across the entire rear end that light up together with the G logo which really makes it stand out. 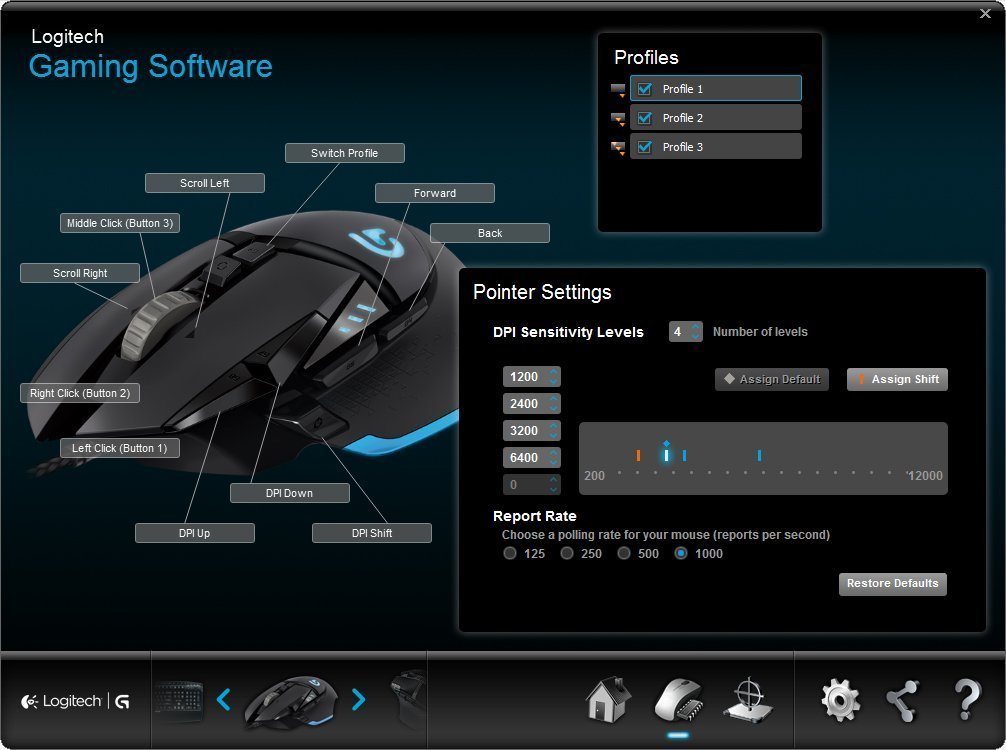 The RGB lighting stands for red/green/blue and essentially mean you can customize it to be any color under the sun. On top of that, you can also choose between an array of different lighting patterns and even connect it with light sync if you have other Logitech products in your set up and synchronize their lighting. If you are not much for gaming software and customization, don’t worry, the default breathing LED pattern looks beautiful.

The LGS or Logitech Gaming Software is not all lights and bells, of course, there is also performance adjustment to be made for the those that want to optimize the mouse to suit their needs. You can adjust the DPI, IPS, acceleration as well as all of the six buttons on the mouse, so there is indeed an opportunity to geek out with the customization if that is your thing.

Although the G Pro weighs in at 83 grams, it does not mean that it is squishy or easily breaks by any mean. The external layer of hardened plastic is quite thick and provides the interior with all the protection it might need. While no gaming product is entirely safe from the power of rage quitting gamers, I’d say that the G Pro is as durable as they come and unless you start throwing it around it should last a very long time.

On the subject of durability, the mouse uses a metal spring button tensioning system which not only makes the mouse more reliable but also dramatically increases the lifespan of the buttons themselves. It has been tested to endure up to around 50 million clicks which put it up there with the more qualitative mice on the market.

All and all it delivers precisely the kind of quality we have come to expect from a Logitech mouse with slick and qualitative materials and a robust well-built interior.

The design, materials, and specifications work beautifully together to create one of the most well-optimized gaming mice on the market, and I certainly see why it is so incredibly popular among esports athletes.

Luckily it also has a very reasonable price tag making it an ideal choice for casuals and competitive gamers alike. It is just as capable as the brand new G Pro wireless but only cost around half that of the Pro wireless.

The only reason I might see that someone would not enjoy this mouse is the small design and lightweight design which is not for everyone, but it is perfect for optimizing performance.

So unless the Ambidextrous design is an issue for you, then I would highly recommend this little killer of a gaming mouse to anyone that seeks to improve on their in-game performance and especially for those that play mostly high-paced competitive games such as Counter-Strike or Dota 2.

Blizzard at GamesCom 2017 – Everything you need to know

ESports Possibly Included in The Paris Olympics in 2024

Pillars of Eternity 2: Dreadfire has 3 Expansions Scheduled for Release in 2018