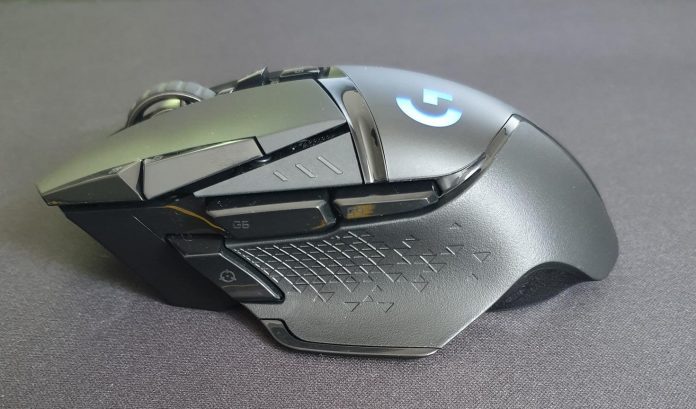 -The worlds most popular gaming mouse has gone wireless with the Logitech Lightspeed technology, and the result is pretty spectacular.

The Logitech G502 has become the most popular gaming mouse in the world these past years due to its stellar ergonomic design and top tier performance. Logitech has also pretty much perfected their wireless technology with their Lightspeed tech so fusing the two seems like an easy win, but is it really that simple?

Well, yes. The Lightspeed tech is a perfect fit for the G502 Hero, and it’s definitely my favorite iteration of the famous gaming mouse yet, but the price does also go up significantly compared to the wired version.

Like most high-end Logitech gear it is absolutely stacked in terms of specifications and features. It uses the 16K Hero sensor, which is still one of the best(in my opinion) on the market and it gives the G502 Lightspeed exceptional tracking and speed capabilities. Whether you are an FPS player that value precision above all or want a mouse with insane speed and acceleration, then the 16K Hero sensor it great. It is well suited for almost any playstyle, which is why I’d still say it is one of the best all-around gaming mice on the market today.

That being said, if you are exclusively into competitive gaming and peak-performance is your only concern, then I would still recommend the G Pro Wireless over this one simply because the ultra-lightweight and ambidextrous design works so well in a competitive setting.

If you are already a fan of the G502 or just want a mouse that works for all game genres, then you will not be disappointed. The wireless connectivity works flawlessly, and the mouse is incredibly versatile in its design.

The G502 has excellent performance, looks cool, and comes from one of the biggest gaming brands on earth, but that is not only why it’s so incredibly popular.

The success of the G502 comes from its exceptional ergonomic design and unmatched comfort. No model to this date has really managed to compete with the G502 in this regard, and it feels very much like the mouse has been custom made for every individual’s hand.

This is the same that led to the success of the Logitech MX518 back in the day and with the G502 Logitech build on and improved on that specific design. It has the same general grip design but also several improvements such as a small platform for the thumb to rest on, a ton of new macro buttons and smoother materials. All of this adds up to, what I would call, the most ergonomic gaming mouse on the market today.

Its design does have one flaw, though.

All of these extra buttons and quality materials does mean that it is a bit on the heavy side. It weighs in at 114 kilograms and while that is not exactly ”heavy”, it is a noticeable setback compared to Logitech’s own G Pro Wireless, and other Esports focused gaming mice.

For most people, this won’t be an issue, but if you play competitive CS:GO or other high-paced games, then it does make sense to opt in for a more lightweight option.

On the other hand, if you like the quality feel of heavier mice, then the G502 is great, and you even have the option to add up to 16 grams of additional weight.

Performance – Haven’t slowed down one bit

The design might be the G502 Lightspeed’s most significant strength, but it is far from its only one. Logitech’s G502 Lightspeed is crammed full of cutting-edge technology and high-end specifications.

Let us take a look at the G502 specifications at a glance.

It has everything you might expect from a high-end gaming mouse but also quite a few additional cool features that make it stand out.

As I mentioned earlier, the 16K Hero Logitech sensor is top-tier. It is the same sensor as the G Pro Wireless, which stands out as one of the most popular mice among professional gamers right now. In other words; it is incredibly precise and can compete at the highest level and regardless of whether you want a fast mouse with insane acceleration or prefer it slow & accurate, the G502 Lightspeed is phenomenal.

It is capable of high acceleration but also offers zero-acceleration, which is sure to please any FPS gamer that seeks to perform on a high level.

Most impressively perhaps is the 1-millisecond report rate which the Lightspeed version of the G502 has managed to maintain despite being wireless. This means that the mouse will communicate your movements with the PC every single millisecond, effectively giving you a much smoother gaming experience than most other wireless mice.

Lightspeed – Still the best wireless tech out there

Logitech has made great strides in wireless technology these past few years, and the Lightspeed connection is what sets them apart from most other wireless mice. It allows the mouse to perform at the same level as even the best-wired mice but with the added convenience of cutting the cord and effectively eliminating all the common issues with using wireless gaming gear at a high level.

The performance is stable even at low battery, it connects instantly every time, and after hundreds of hours, you won’t experience a single latency issue. (Mind you I use the G PRO Wireless myself, so this is based on the Lightspeed technology, not the G502 specifically)

Battery life is exceptional and offers more than 50 hours of non-stop gaming, but even when you do run low, it isn’t a problem. The mouse comes with a wired charging cable that can be plugged in easily, which allows you to keep on playing even while charging. Furthermore, it reaches maximum battery after a few hours of charging.

You can conveniently check the remaining battery life by clicking the G9 button, which will flash 1-3 green lines to indicate how much is left. The mouse will automatically turn off when you stop using it for a while and instantly turn back on the second you move it.

The G502 Lightspeed is also compatible with the Logitech Powerplay mouse pad which can charge it while playing without any wires. This is very cool and convenient, but I’d argue it isn’t worth the extra money seeing as charging the mouse is already so fast and easy.

The mouse is customizable in several different ways. It has additional weights that allow you to adjust the physical weight of the mouse, and through the G-Hub software, you can customize the lighting as well as the keybindings and performance.

The G-Hub software is pretty user-friendly, and if you enjoy making custom macros and personalized performance settings, then the G502 is perfect.

Even though you can adjust the mouse in a ton of different ways it still is a very good plug-and-play mouse so if you don’t like messing with settings then don’t worry, it is in no way necessary.

The regular G502 is one of the best wired all-purpose gaming mice in the world, and the Lightspeed version is definitely one of my favorite wireless picks of all time.

Its design is outstanding and stays comfortable no matter how long you play in a row, and the performance, and wireless technology is on par with the G PRO Wireless, which I’d say is the best wireless mouse of all time.

No matter what genre of games you enjoy the most or how often you swap between them, the G502 Lightspeed is a stellar option.

The only real downside to this mouse is that it is slightly heavier than I’d like, and it is also quite pricey. The additional weight does hurt it’s performance somewhat at the highest level. So if you are a Global Elite Counter-Strike player or a Challenger in League of Legends, I would recommend the G Pro Wireless instead. Nevertheless, Logitech has succeeded entirely in creating a wireless version of the G502, with everything that makes it so great and so popular.