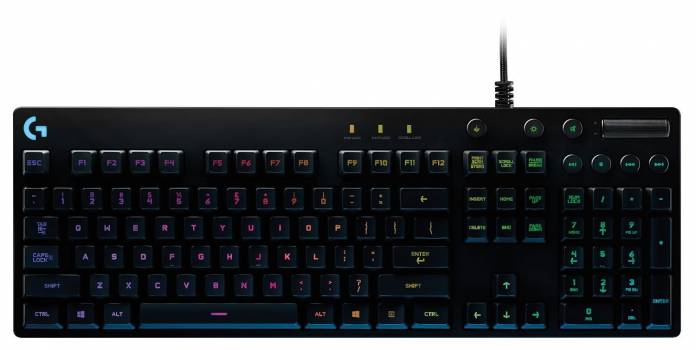 The G810 Orion Spectrum from Logitech is the culmination of over 30 years of experience making PC equipment. It’s just so well done.

This G810 Orion Spectrum from Logitech is a slick and efficient mechanical gaming keyboard that is customizable in an almost endless number of ways.

If you have other Logitech accessories such as headsets or a mouse, this device allows you to sync with it for more efficient use. It also comes with quality videos and music controls which add fun and ease to its use.

Its Romer-G switches give you swift and satisfactory feedback, whether you go with the linear or tactile version. To learn more, check out our full guide to mechanical switches.

These are some of our favorite qualities of the G810 but far from the only ones we enjoyed. In this Logitech G810 Orion Spectrum review, we will take an in-depth look at everything from the performance to its software and switches.

The Logitech G810 OrionSpectrum is a gorgeous keyboard with a wide range of functionalities built with an impressive interface and high-end performance, worthy even of competitive gamers.

This device is 100% targeted at gaming. However, that does not mean it doesn’t work very well as a for typing as well. The design of the Romer-G keys can really help speed up your typing once you master them.

Although I slightly prefer Cherry MX or the Razer custom mechanical keys. The Romer-G’s speed and durability are still fantastic and almost up there with the very best.

If you need a reliable keyboard with a stylish design, comfy-to-use keys, fast response and excellent performance with broad compatibility, then you should definitely consider the G810 Orion Spectrum.

It is free and easy to use as it comes with any Logitech G equipment. The software allows me to update the keyboard’s protection, manage game profiles and also adjust the keyboard lighting.

Something interesting about this software is that when I ran it for the first time, it loaded conveniently, with gaming profiles for all the games contained in my hard drive, including those in MS Excel and MS Word. Apart from its 12 programmable F-keys, it is also built to allow easy creation of various custom profiles.

This peripheral device is also designed to provide sufficient lighting. It has the full RGB color scheme and provides up to 16.8 million color palettes. What’s more, it can also sync its LED lights with all other Logitech gaming devices. So having a full set of Logitech gaming setup can indeed be quite the spectacle.

At first glance, the Logitech G810 looks quite dull, but once you plug it in and it begins to light up, it becomes a classy and gorgeous piece of gaming equipment.

Design wise Logitech has aimed to strike a middle-ground between ergonomic and practical. Its space or working surface area is well utilized with the keys almost touching its edges, something that makes them look like those of a membrane keyboard. It is designed to embrace the change of pace and provide good support whether you are writing or gaming.

The keyboard also comes with discrete media controls, thus enabling users to control volume using a roller, fast forward or rewind, play or pause. Different from most gaming keyboards which have several buttons, this keyboard comes with a reduced number of buttons which makes it stand out from competing products in the market.

It also has an integrated LED control button that allows you to activate or deactivate its lighting. Besides, it also has another one for the game mode which can disable screen minimizing keys when playing. Which helps ensure an uninterrupted and pure gaming experience.

The Orion Spectrum is designed to be used for various gaming genres. After running it through 4 different games — StarWars: The OldRepublic, Batman: Arkham Knight, StarCraftII: Legacy of the Void, and Overwatch — the keyboard performed excellently. While hardcore MMO players might prefer having an extra macro button similar to those found in the Razor Black Widow or Orion Spark Chroma, its ability to reassign function keys should ease some of their fears.

Programming macros for The Old Republic and assigning a function key to them was not complicated in any way as doing the same with macro keys. This gaming peripheral delivers everything that it needs to increase you in-game functionality.

The Logitech G810 is designed with Romer-G mechanical switches that come alongside a 26-key rollover which enables it to work efficiently with no disappointments in fierce typing or gameplay, even when you smash several keys at once.

The G810 comes with two different type of keys, linear and tactile. Which you should get really depends on the games you most enjoy. Whereas the Romer-G linear is fantastic for double tapping, making it great for MMO’s and action games. The Romer-G tactile is simply better for more precision required games such as first-person shooters.

Even though I did not use the provided game profiles, from both my observations and the customer reviews I read, this is a cool feature. For instance, when the police are pursuing you in Grand Theft Auto V, the lights on the top of the keyboard would give blue and red flashes which resemble police lights. This feature is not only cool but can be very useful as well in games such as Overwatch. Where the keyboard will light up when your ultimate is ready.

The Orion Spectrum works perfectly with the Logitech gaming software, which is without a doubt one of the better gaming peripheral management programs available in the market today. This program allows you to reprogram specific useful keys, play with the keyboard’s full RBG backlighting and connect games to custom profiles.

This software automatically searches through your system for any games and creates profiles for them, which shortens our work to just picking a color scheme and assigning additional commands to the function keys if need be.

Since the Orion Spectrum is not built with any extra macro keys, it makes use of a novel solution using the keys F1 to F12. This implies that you can create game profiles and reprogram each of the function keys like any other command. Be it a macro, program function or a keystroke. It provides a real-time solution to potential problems because the function keys do not match automatically in a majority of the games.

Its lighting options are also another attractive feature. It provides you with the possibility of using the existing patterns or individualizing each key, such as a rainbow wave which passes along the keyboard. You can even make the keys’ colors change whenever you tap one. Also, its lighting customization options are not as well done as some of its competitors such as Razer or Corsair. It syncs perfectly with other Logitech peripherals like headsets and mice.

The LogitechOrion Spectrum is much more than a good-looking keyboard and comes with a lot of smart features that suit all kind of gamers. As well as a high-level performance that could satisfy even the most hardcore of players.

It comes with a pack of features that enable it to work efficiently, which makes it stand out among its competitors. Away from its performance, it is quite reliable and hardly fails.

This device is well designed with gorgeous lighting options and easy-to-use media control buttons. This makes it a worthy consideration for any gamer who wants to better their gaming experience and improve their performance.

Knowing what you will get before buying the product can never be underestimated, and if you are intrigued by the Logitech G810, you can go right ahead and claim it without a single worry.