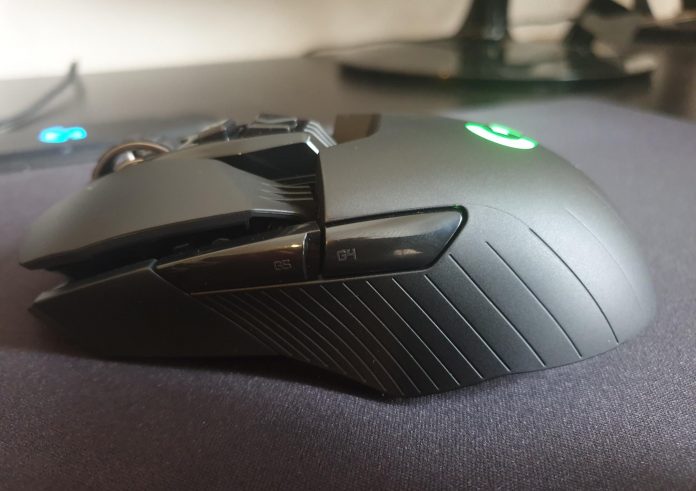 -The G903 is another prime example of why Logitech is considered the best on the market when it comes to wireless gaming mice. The Lightspeed technology works perfectly in sync with the new 16K Hero sensor to provide you with a level of reliability and raw power that few wireless mice can compete with.

The G903 Lightspeed is the successor to the popular G900, a mouse that was long considered the best wireless gaming mouse on the market and was even used by professional players at tournaments.

So the natural question is; does it live up to its predecessor’s reputation?

The short answer is yes, Logitech has wisely chosen to keep an identical design to the G900, and it has seen significant upgrades in both features and overall performance.

The G903 Hero is equipped with the powerful 16K Hero sensor with cutting edge performance, 1-to-1 tracking, and highly customizable experience. It is also incredibly power-efficient and can be used for well over 100 hours without any trouble, compared to the 30 hours the G900 could manage. In terms of raw performance, the 16K Hero and the old PMW3366 is pretty much identical though, and I didn’t notice any major differences.

If you, like me, fell in love with the G900 then the G903 won’t disappoint. It has been upgraded in almost every conceivable way without changing what made it great in the first place. It’s high-end performance, and highly customizable design makes it an excellent choice for competitive and casual gamers alike.

The design is one of the biggest reason the G900 was such a fan favorite for so long, and Logitech has kept it almost identical to the G903. In terms of quality, it feels both sturdy and incredibly durable and has a real luxury feel to it.

The design is entirely ambidextrous and can be used by both left and right-handed users with ease. And you can even swap out the thumb buttons on each side to fit your preference.

What really makes the G903’s design stand out compared to other ambidextrous mice is the pivoted buttons which bring the mouse keys closer to your fingers natural resting position. It is incredibly comfortable to use, but it also does make the mouse feel slightly bigger compared to the likes of the G Pro Wireless. Which you prefer comes down to personal preference and nothing more.

The more advanced design of the G903 does allow for a large number of keybindings which is fully programmable through the G Hub software. This is fantastic if you enjoy heavy macro games such as MMORPG’s or real-time-strategy.

It has all the buttons you’d come to expect with four thumb buttons, two DPI switches, etc. But what really makes it stand out is the mouse wheel, which contains three easy-to-use buttons. You can nudge the wheel to either left or right as well as press it down. It is really convenient to use, and it quickly became one of my favorite key bindings.

You can’t talk about high-end wireless gaming mice without mentioning the Logitech G Pro Wireless so I thought it would make sense to compare these two masterpieces.

Designwise, the G Pro Wireless has a much more simple look and also weighs considerably less. Weighing in at 87g compared to the 107g of the G903. A lot of competitive gamers will generally prefer the lighter option, but the G903 does provide you with a lot more customizability and key bindings.

In terms of raw performance, the two mice are identical. Both have excellent connectivity, high-end specifications, and extraordinary battery life. They are some of the few wireless gaming mice that you will see professional players use at tournaments and can easily compete with any mouse wired mouse on the market.

Which of these two mice you prefer comes down to personal preference. If you are a big fan of key-bindings, then I would recommend the G903. But if you play games such as CS:GO or League of Legends where speed is critical then the slightly lighter design of the G Pro Wireless might be more up your alley.

Just like its predecessor, the G903 is among the most powerful and reliable wireless gaming mice on the market. The Lightspeed connectivity is hands down the most lag-free and stable wireless connection on the market and works perfectly together with the 16K Hero sensor to create one of the most seamless gaming experiences out there.

Specifications at a glance

When you look over the technical specifications of the G903, they are almost impossible to beat, and it does in this case, it does translate into raw performance.

The ultra-fast connectivity combined with the equally quick sensor works together in perfect harmony to give you a completely lag-free wireless experience. Both its speed, acceleration, and filtering is entirely customizable and can be activated or deactivated easily with the G Hub software. The zero smoothing, filtering, and acceleration option is something that FPS players will love since hitting your target is incredibly difficult if your mouse has acceleration activated.

Whether you enjoy a mouse with incredible speed and report rate or maybe want to run a slower DPI to achieve higher precision, then the G903 has got you covered.

It is no wonder that this model is used even at the highest level of play, it’s overall performance is near perfect, and the absence of wiring makes it feel that much smoother.

While the battery life isn’t exactly bad on the G900 or the early versions of the G903, the brand new G903 Hero puts them all to shame with its astonishing 180 hours of battery life.

Granted, 180 hours is only achievable with lighting turned off, but it can go as high as 140 hours with default lighting.

The exceptional battery life of the G903 Hero adds a whole new level of freedom to the wireless experience as you barely ever have to charge it. And even when you have to charge it, it is incredibly easy, and you can also play while charging with either the wire or the Powerplay mouse pad.

Powerplay – Is it worth it?

Logitech has almost shot themselves in the foot with the 140 hours of battery life since it removes some of the appeals of the Powerplay charging pad.

That said, it is an incredibly cool gadget, and you will never have to charge your mouse again. Whether it’s worth the cost is up to you, but we did do a complete review of the Powerplay charging pad to give you a good overview.

Final Verdict – One of the best

The brand new G903 Hero tops the charts in both performance, quality, and features. It is, without a doubt, one of the best wireless mice on the market.

If you are looking for a wireless mouse that can compete at the highest level or maybe just want a really smooth gaming experience, then I would recommend the G903 Hero. If you are a competitive player, then you might also want to consider the G Pro Wireless, but apart from that, the G903 doesn’t have any real competitors among other wireless mice.

I loved testing the G903 Hero, and although I prefer the G Pro Wireless because of the ultra-lightweight design, I would still argue that the G903 is as good as it gets.

That said, both the G903 Hero and the G Pro Wireless are very expensive and I wouldn’t recommend them to people who are on a tight budget. Although you do get what you pay for and they are both well worth their price tag.