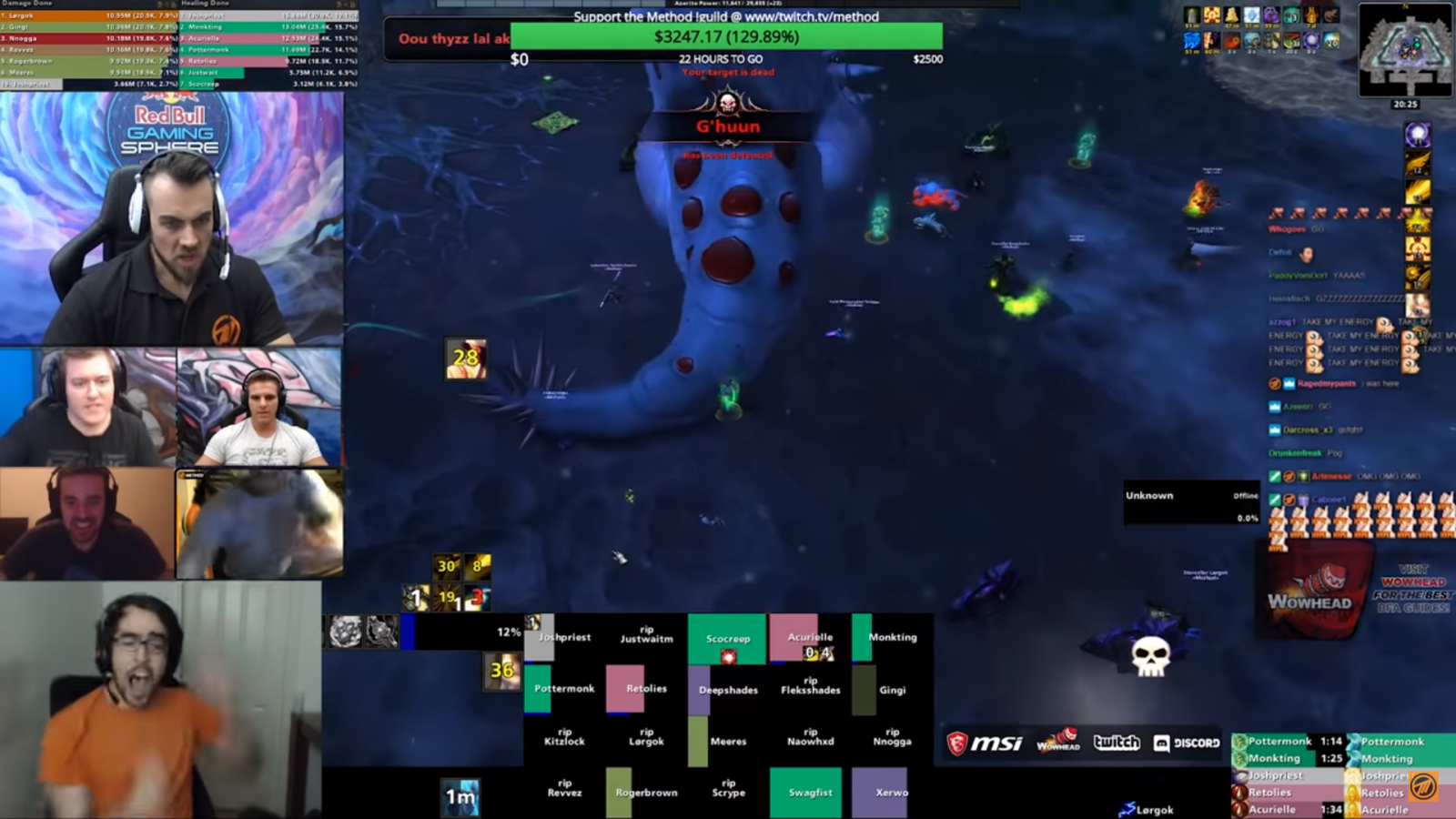 Blizzard has tried to make World of Warcraft into a successful esport for some time now, both with the Arena Championship and the Mythic Dungeon Invitational.

While both the Mythic Dungeon Invitational and the Arena World Championship are both decently successful esports in on themselves, none of them has gotten anywhere near the recent viewership of the Mythic Uldir Race outside of Blizzcon.

Today I will try to measure the success of the Method Mythic Raiding stream and compare it to the two current World of Warcraft esports, the MDI and AWC.

Note: I will be referencing the recent Method Mythic Stream as an actual ”esport” throughout this article although I realize it isn’t entirely one.

The Mythic difficulty of Uldir, the first raid in Battle for Azeroth just opened a bit over a week ago, and as always the race for world first was on. However, something was different this time. Method, widely considered the best raiding guild in the world decided to stream their world first progress for the first time in World of Warcraft history.

This was unexplored territory as top guilds have previously avoided doing it as not to give away their strategies on the bosses. So it was hard to know what to expect regarding popularity when Method announced they would be streaming every second of their progress in Uldir and I think its safe to say that it went above and beyond what anyone estimated.

On September the 19th, Method(EU) managed to kill G’huun, the last boss of Uldir as the first guild in the world to do so on Mythic difficulty. And how do I know? Well, I was watching with over 250.000 other people across the globe which is unprecedented for World of Warcraft esports outside of Blizzcon

The Format: How it worked

So how did it work?

Sco, Josh, Gingi, Roger, Lorgokz among other members of Method had their own personal stream where you could watch the progress from different perspectives, be it the tank, healers or damage dealers.

On top of this, there was also the official Method stream that followed the progress with commentary from several different World of Warcraft and Method personalities.

The most popular was to no one’s surprise the perspective of Sco, the main tank, and founder of the Method organization with a little over 160.000 watching his stream alone at the time of the kill, with around 100.000 viewers spread across the other Method streams.

The race to world first not only compete with the current World of Warcraft esports but surpasses them by quite a margin regarding Twitch viewership. It was so popular that World of Warcraft competed evenly with games such as Fortnite and League of Legends during this past week.

Note: This is Twitch viewers only as there were no official numbers on foreign views for the Method stream it would be impossible to compare. The stats are from the last 7 days on Twitch, and we used the 5 biggest Method streams to determine the numbers, so they are not 100% correct, but very close.

A quick look at the stats gives a pretty clear idea of just how big a success the Method Stream has been, and the fact that an outside organization and not Blizzard did this is just crazy.

What is most curious about this World of Warcraft success is that the stream was in no way affiliated with or supported by Blizzard.

The biggest competitive Wow stream ever had nothing to do with Blizzard, let that sink in for a moment. Blizzard did not even mention it until G’huun was already dead. When Lead Developer Ion Hazzikostas tweeted to congratulate Method on their world first.

The first spot in the Uldir Hall of Fame has been claimed: https://t.co/qrmxzFQsld – who will be next? (Reminder that cross-server Mythic unlocks when those are both full!)

The undeniable success of the Method stream makes us wonder what this format could become if Blizzard decided to host it officially.

Could it become an Official Blizzard Esport?

”The World of Warcraft Mythic Race”

I am very curious to see if this has pushed Blizzard to make plans for future raids about an official Blizzard esport raiding stream.

The stream was already a great joy to watch but imagine what it could be with professional commentators, viewer-friendly UI and more importantly, the perspective of multiple guilds.

Why it could be awesome

1. It was close, very close

While Method ended up winning the world first race over their closest competitors, Limit it was not by a landslide by any means.

A world first race this close would be incredibly exciting to watch as a proper Blizzard supported esport.

Methods stream was incredible, but it was just that, Method’s stream. Sadly we could only guess and speculate about what Limit and the other few guilds progressing on G’huun was up to.

Swapping between the different guilds as they progress through the latest raid would make it a lot less one-sided than just watching one guild and while I am sure Method would still be the fan favorite it would be nice to see the other guilds getting some love.

One of the downsides of the stream was that we could not follow the raid communication which leads to long periods of time without a word uttered on the stream.

While I think they should keep the individual streams, it would be fantastic to see an official Blizzard stream with a user-friendly interface that informs the viewers with stats, cooldowns, phases, and more. As well as having professional and knowledgeable commentators commentating the event and help viewers understand the fights.

4. Better for the Players

Having Blizzard behind the event would also drive even more sponsors to the scene and make it more lucrative for more players.

Right now it is very few mythic raiders that make decent money of off raiding although it takes up a lot more time than a regular full-time job.

With the stream focusing on more than just Method it might become lucrative for a few more players as well as adding an official prize pool for the contenders.

They could even make it a bit more humane regarding hours spend and thus more fair by setting a limit of 8 hours of mythic raiding a day or something of the sort.

This would not only provide Blizzard with an additional successful esport and give viewers an even more enjoyable experience, but it might also increase the interest in high-end raiding in general among the World of Warcraft community which has been dwindling for some time now.

Blizzard is the best in the world at creating beautiful raids with incredible encounters, why not show it off?

Conclusion – a lot of potential

It’s hard to argue against the stats and while it might have gotten more than it usually would because it was a first-time event it still went quite a lot above what anyone expected and showed great promise.

I think an official Mythic raiding esport would be enjoyable for both the raiders and the community and I certainly think the potential is there for it to succeed.

Once again, a huge congratulations to MethodGG on the world first kill on G’huun in Uldir Mythic.