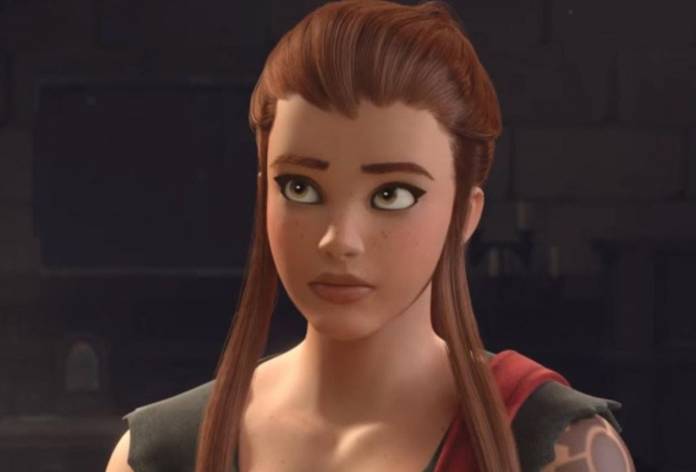 The newest addition to the Overwatch roster was recently unveiled to the public. She is a tank and healer hybrid, the daughter of Torbjörn, and looks awesome.

Birgitte practically grew up in the workshop of her father, and much like her Torbjörn, she showed a lot of interest and skill for the engineering profession. However, unlike her father, she had a much more prominent interest in the creation of armor and other defensive systems.

While everyone expected her to go in her father’s footsteps and continue her apprenticeship, Birgitte had other plans. Growing up she was always fascinated by the stories of Overwatch, heroes, and chivalry. Stories told by her godfather and close friend of the family, Reinhardt.

So when Reinhardt went on his knights-errant to bring justice to the world, Birgitte asked to accompany her as his squire and Reinhardt accepted. Birgitte’s job started with the upkeep of Reinhardt’s crusader armor but evolved to taking care of Reinhardt himself and trying to keep him from his overconfidence, especially as his body was starting to show real damage after all these years of combat.

In the end, Birgitte realized that mending his armor wasn’t the best way to help out his mentor, Reinhardt, and decided to become a real warrior herself. With steely determination and the combat training of Reinhardt, she became a very able warrior in her own right and now fights alongside Reinhardt to bring justice.

This is how Blizzard describes Birgitte on the official hero page.

Brigitte specializes in armor. She can throw Repair Packs to heal teammates, or automatically heal nearby allies when she damages foes with her Flail. Her Flail is capable of a wide swing to strike multiple targets, or a Whip Shot that stuns an enemy at range. When entering the fray, Barrier Shield provides personal defense while she attacks enemies with Shield Bash. Brigitte’s ultimate ability, Rally, gives her a substantial short-term boost of speed and provides long-lasting armor to all her nearby allies.

Extended melee swing that does area damage in a cone, allowing her to attack multiple heroes per swing.

Throw a repair pack onto an ally hero, healing them for a set amount. If Repair Pack overheals it will provide the extra healing as armor instead.

Birgitte throws her flail and knocks back enemies hit.

Activates a frontal energy shield that absorbs damage and has a separate health bar.(this is very much just a smaller version of Reinhardt’s barrier.

Dash forward and knock down enemies hit. This can only be used with Barrier Shield is active.

Birgitte removes at an increased pace and gives armor to nearby allied heroes. This bonus is removed when Birgitte takes damage.

A few fun facts about Birgitte.