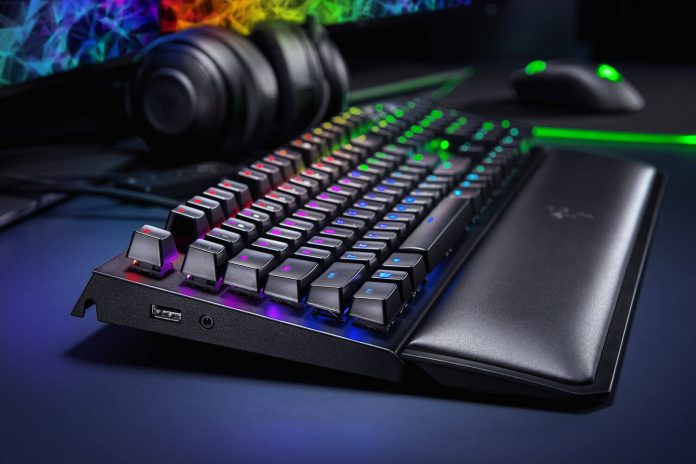 -The Razer BlackWidow Elite is a powerful mechanical gaming keyboard worthy of its name. Its layout is incredibly instinctive and ergonomic and is nicely complemented by the soft wrist rest, while the Razer mechanical switches provide a satisfying and tactile gaming experience that is hard to beat.

As a huge fan of the first BlackWidow I can honestly say I am impressed with Razer and how they have managed to improve on several aspects without hurting the core design that made it great in the first place.

The Razer BlackWidow Elite is not only comfortable to play on, but every click is immensely satisfying due to the finely tuned Razer switches. I tested the BlackWidow with Green Razer switches, which is the tactile and clicky version and unlike most other keyboards with this type of switches, it manages to be clicky, but not overly loud, which allows people with roommates and thin walls to enjoy the satisfaction of playing on a clicky mechanical keyboard.

On top of being comfortable to play on, the Razer switches are industry leaders when it comes to durability and also offer high-end performance that rivals even Cherry MX switches. Their responsiveness is lightning fast, and the well-balanced actuation point and travel distance make it such a joy to play games on but also gives you a clear competitive advantage.

The Razer BlackWidow Elite is ideal for any gaming type. It has the performance and competitive edge to be viable even at the highest level of play while not excluding the more casual gamers with overly high sensitivity or a super low actuation point. It is an extraordinarily comfortable and capable keyboard that I would recommend to any player looking for a new mechanical keyboard.

My only real complaint with this keyboard is with the media volume wheel. It sometimes exaggerates your commands, meaning if you turn your volume up or down, it will at times turn it all the way up or down.

While the Razer BlackWidow has excellent overall performance and a ton of awesome features, the real star of the show is its ergonomic design. The layout of the keyboard is intuitive and incredibly comfortable to game on for hours on end. The highly elevated keys, combined with the slight curve in its design, makes it one of the most ergonomic keyboards I have ever tested.

And as if that wasn’t enough, it also comes with a very soft and comfy wrist rest which only adds to the luxurious feel of the BlackWidow.

In terms of quality, the Razer BlackWidow doesn’t disappoint either. The keys and switches feel sturdy and durable and have even been tested to last up to 80 million keystrokes which are more than any of its competitors. The base of the keyboard is heavy and sturdy, which adds a lot to the quality feel while also making sure it doesn’t move around on your desk while you play.

The Razer BlackWidow is not only a functional improvement over its predecessors but also a visual one. While the keyboard looks quite identical to the earlier versions of the BlackWidow is has a lot of small minor improvements that all together give it a much more professional look.

The keys have a more smooth surface, and the lighting is more dimmed and less exaggerated which together with the added media wheel, and wrist rest gives the BlackWidow a much more high-end look than earlier BlackWidow keyboards.

The biggest strength of the BlackWidow in terms of performance is the fact that it is tuned well for any type of play. Unlike others on the market like the HyperX Alloy, it doesn’t exclude casual players with excessively low actuation points or extreme sensitivity. It feels very natural to play on and has next to no learning curve in terms of its design. What is impressive about this is that it fits for such a wide range of player types while still performing well enough to be used at the highest level of play.

You cannot talk about the performance of a mechanical keyboard without discussing its switches. Razer, unlike most other high-end brands, doesn’t just use the standard Cherry MX switches but have their inhouse switches. The Razer Green, which is tactile and clicky, the Razer Orange which is tactile and silent, and lastly the Razer Yellow which is linear and silent. This review is based on the Razer Green switches, which is equivalent to the Cherry MX blue.

You can read our full guide on mechanical switches here.

One thing that I noticed right away is that the new Razer Green is not as loud as the old version but still manages to provide that satisfying clicky feel. This was one of the primary reasons that I used to prefer the Cherry MX blue over Razer’s own but this puts them at an even playing field.

Performance-wise the Razer Green is quite extraordinary, and it is no wonder that even professional players pick up this keyboard. It is exceptionally responsive with excellent tactile feedback and a remarkably satisfying feel when clicked.

So does that mean it is better than the Cherry MX switches? Well, no. The newer version of the Razer Green is so good because it feels and performs exactly on par with the Cherry MX with slight minor differences that you won’t notice unless you have been using Cherry MX keys for years.

The Razer BlackWidow Elite comes with quite a few additional features and gimmicks that are worth mentioning in this review. First off, it comes with a fully functional Media control center which allows you to pause, play, mute, and control the volume on your music and videos with ease. It also has an additional USB and Jack port on its left side, but it also requires you to use two USBs and a jack for it to be functional. So all it does it to move those ports to a more convenient location.

Now the real gimmicks and extra features come through its customization in Razer Synapse.

With the Razer Synapse software, you can adjust all of the usual things such as lighting and keybindings. Although it is worth noting that the Chroma lighting on the BlackWidow Elite comes with a lot more patterns to choose from than most and even allows you to create your own customized lighting effects through Chroma Studio. Software geeks will love playing around with the advanced lighting settings in Chroma Studio.

Razer Hypershift also allows you to have an entire additional 104 keys as you can program other keybindings for every single key and easily swap between them with a chosen macro.

Final Thoughts – A worthy successor to the iconic keyboard

As a massive fan of the original BlackWidow, I was delighted with the new Elite version. It has kept all of the things that made it great in the first place while improving on its ergonomics, lighting, and performance.

The Razer BlackWidow Elite is the perfect introduction to mechanical keyboards for anyone thinking of making the switch from membrane but also an excellent keyboard for more serious gamers that seek to enhance their performance.

My only real complaint is with the volume wheel which on rare occasions exaggerates your commands and turns the volume all the way up or down. It is worth noting that this doesn’t happen often and I haven’t seen others complain about it, leading me to think that I just got unlucky with my keyboard.