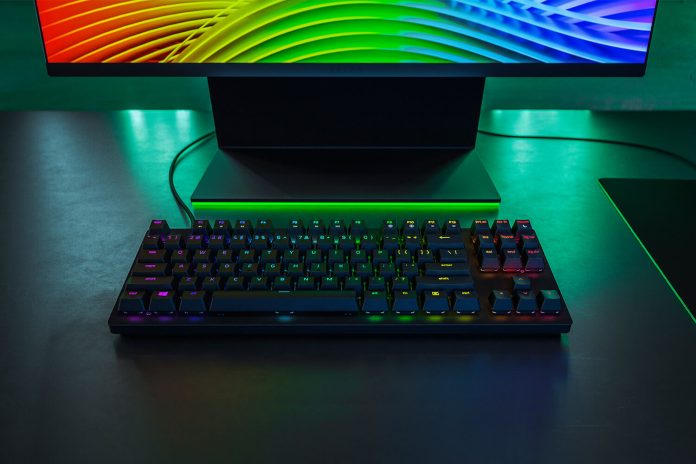 -The Razer Huntsman Tournament Edition(TE) is a competitive gamer’s dream. It’s simple, durable, and , most importantly, it is incredibly powerful and responsive. The cutting-edge optical switches make it the fastest and most competitive Razer keyboard to date, while the PBT thermoplastic makes it the most qualitative.

It is obvious straight away with the Huntsman Tournament Edition(TE) that it’s designed with one purpose in mind, competitive gaming. Everything, from its specifications, to its design and layout, is finely tuned for maximum performance.

Unlike most other Razer products, the Huntsman TE is simplistic and minimalistic in its design. Whereas Razer usually has a significant focus on flashy RGB lighting and over-the-top features, the Huntsman TE is designed to perform above all else. This might be a slight disappointment for the average Razer fan, but if you are into competitive games like League of Legends or CS:GO, then this keyboard is nothing short of amazing.

It is no wonder that several professional gamers like Benjyfyshy, Khuna, and many more have already switched over to the Razer Huntsman TE.

While the simplistic and compact design is great, the real star of the show is the Opto-mechanical switches. The keys use digital optical actuation via a beam of light inside the switch that signals your computer, which means that it responds to your keypresses at the speed of light. All the while keeping the satisfying, clicky feel of classical mechanical keyboards.

Last but not least, Razer has also switched out the usual ABS materials in favor of PBT thermoplastic, which is not only more durable and sturdy than the average ABS or PVC keys but also feels a lot better and more qualitative.

The Huntsman TE is hands down Razer’s best keyboard for competitive gaming to date. They have cut all of the usual flashy, unnecessary features, and we are left with a minimalistic keyboard that is finely tuned for conquering your enemies and take your performance to the next level.

Razer is known for feature-heavy, over-the-top flashy gaming gear like the Razer Blackwidow, but the Huntsman TE is a complete departure from that philosophy. It has next to no additional features, and even the lighting is very subtle. This might sound horrible if you are a fan of Razer’s regular products, but this keyboard is not made for you. The Huntsman TE is for serious competitive gamers that seek any advantage they can gain over their opponents, and for those gamers, the minimalistic design is very close to perfection.

That said, if you want the Huntsman for the Opto-mechanical switches but still want some of Razer’s trademark flashiness, then you can opt into the Huntsman Elite.

The application of PBT not only makes it more durable than the average keyboard but also more comfortable, and I wish more brands would switch over to PBT. The keys on the Huntsman Tournament Edition are slightly rougher, which adds additional comfort and traction as well as giving it a very premium feel.

Performance – Most Competitive Razer Keyboard Yet

The Razer Huntsman TE is all about performance. Its tournament friendly designed combined with the cutting-edge optomechanical switches makes it one of the most finely tuned competitive keyboards on the market today.

It is incredibly responsive and swift and will undoubtedly give you an edge in competitive games compared to the average keyboard.

At the end of the day, a mechanical keyboard is only as good as its switches, so let us talk about those.

Regular mechanical switches are designed much like a classic typewriter, where actuation activates a physical response inside the switch. However, the brand new optical switches from Razer use digital lighting to send a signal to your PC, which makes it faster and more responsive than your average mechanical switch. Which is what makes the Razer Opto-mechanical switches so exceptional for fast-paced competitive gaming.

After all, you cannot beat the speed of light.

Another great thing about the optomechanical switches is the fact that it completely eliminates debounce delay. After pressing a key on a regular keyboard, there will be a slight delay before the signal is sent to your PC. However, with the Huntsman TE, your PC will receive the signal the instant you press the key.

The digital switches are not only fast, but also very satisfying to use. Luckily, Razer chose to keep the classic mechanical feel and sound that is a big part of why people love mechanical keyboards.

It’s quite simply a win-win.

Most people won’t notice the difference

On paper, the Opto-mechanical switches are superior in almost every way to other switches on the market. However, it is important to note that regular mechanical keys are already incredibly responsive, and the difference is a matter of milliseconds, which is hard for the human brain to notice.

That said, it certainly does make the Huntsman Elite incredibly responsive and gives it a much smoother feel than the average keyboard.

The Razer Huntsman Tournament Edition is intentionally designed to be minimalistic and only provides you with the essentials needed for competitive gaming. So if you are a fan of large keyboards with media controls and additional macro keys, then the Huntsman TE is not for you.

It does have a few features with mentioning, such as full Razer Chroma customization and onboard memory that lets you store separate configurations with Razer Synapse.

The Razer Huntsman Tournament Edition nail all the most critical factors for a competitive keyboard. It’s compact and tournament ready, it has extraordinary speed and responsiveness and also feels very comfortable to play on.

Usually, Razer has an equal focus on esthetics and performance but this keyboard is all about competitive performance, and I love it. So if you play competitive games and want to improve your gameplay, then this is a perfect fit for you.