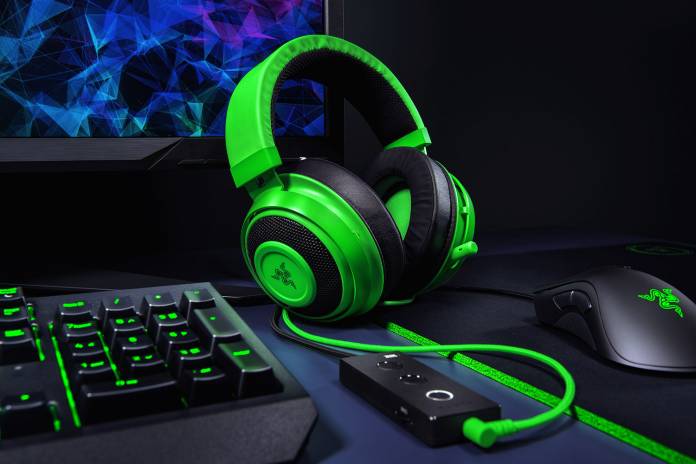 The Razer Kraken Tournament Edition provides you with superb sound quality and crisp bass but the microphone is a bit of a letdown.

Razer Kraken headsets have been around for quite some time now and can be easily identified by their bright green body coat. The latest Razer Kraken version, the Tournament Edition (TE) is one step ahead of its predecessors when it comes to taking your PC gaming experience to the next level. There’s nothing really fancy about the headset; it’s all about gaming.

The Razer Kraken Tournament Edition is the best in the series yet for PC gamers but not well suited for console gaming.

Razer Kraken Tournament Edition wired gaming headset comes with THX simulated surround sound, dual 50 mm drivers, and a 5.1 channel USB audio adapter. The gaming headset is great for under $100. Even though it is not the fanciest gaming headset on the market, it provides users with a solid feel, stellar performance, and a plethora of features at an affordable price.

The microphone is probably the only issue in Kraken TE. It’s just too silent, and some settings in Synapse seem entirely pointless. If you reduce the sensitivity a little too much, you’ll have to shout to be heard clearly. While mic sensitivity typically acts as a noise barrier and helps you block unwanted background noise, Kraken TE’s microphone blocks your voice as well. Don’t get me wrong. It is not because the microphone is not okay for some simple in-game voice chat or Discord, it’s just not up to the quality we’d expect from a Razer headset in this price range.

For gaming, the headset is perfect, but if you’re planning to use it for streaming purposes, I recommend you get a separate microphone.

Razer Kraken’s design hasn’t changed a lot over the years. It actually forms the basis of all Razor Kraken headsets. Two huge earcups adorned with the Razer logo and comprising 50 mm drivers are connected by a broad padded band, which adds a touch of comfort to the headset.

I wore the headset for almost 5 hours straight, and my ears were cool and comfortable during the gaming session. The ear cushions are made of memory foam and infused with cooling gel and cancel external noise to ensure you stay focused on your game. And, honestly, they work well. Even with my glasses on, the gaming headset felt really comfortable. There are concealed cutouts in the ear cups that allow added space for the arms of your glasses. The headbands can be adjusted easily with steady click-stops and are flexible.

As a whole, Kraken TE is reasonably simple and connects to any device with a 3.5 mm jack. There are no on-earcup lights or controls; you’ll only find a microphone on the elastic metal arm that withdraws into the left earcup when you’re not using it. The permanent wire is attached to the headset and covered with black braided fabric. A tiny remote with a volume control wheel and a mute microphone switch can be found in the bottom part of the wire. The THX audio control attached to the wire also has a sticky backside which can be used to firmly attach it to your desk which was a surprisingly simple, yet innovative solution to a common problem; Having to go down the wire to find the controls. This means that you always have the most important controls at hand and within reach which is great during intense gaming sessions where you usually wouldn’t have the time to adjust it.

Connectivity Options – Made for PC Gaming

The attached cable is good to go for systems such as Xbox One S and PlayStation 4, where the controllers come with built-in headphone jacks. However, for PC gaming, the USB cable is better as it is longer than the attached cord and also provide better audio.

The USB cable comes with an audio control box on one end and a USB plug on the other. The box is a tiny, 3.4-inch plastic container with big Volume Up, Volume Down, and Mic Mute knobs on the top. On the left face of the box, you’ll find a jog dial for altering the bass, and on the right, you’ll see a switch for toggling THX Spatial Audio and a jog dial for adjusting the game and voice mix. A 3.5 mm jack on the front panel of the box connects the attached cable to the USB cable.

Microphone, can anyone hear me?

When it comes to PC gaming, the microphone sounds great and will do fine for in-game voice chat, although you might need to adjust sensitivity. But, for streaming and content creation, I would recommend a dedicated microphone since Kraken TE’s microphone is not very clear and crisp for recording purposes. I also feel the brand should bring back the red ring on the muted microphone which is implemented on some other Razer headsets like the new Razer Nari.

I used Razer Kraken TE while playing Call of Duty – Black Ops 4 in the Blackout mode. I was a part of a squad comprising 4 players whose voices I could distinguish clearly in the game chat. However, my microphone wasn’t loud enough at times which could cause some confusion in certain situations.

The THX spatial audio transformed the sound of battle into splendid simulated sound. Even though the stereo drivers in the earcups couldn’t accurately indicate if an audio source was in front or behind me, the processing enabled precise lateral imaging. I could understand when gunshots were near me, in front of me or behind, toward my left or right. All the action sounded crisp and powerful. Explosions and gunshots did not hurt my ears, thanks to the headphone’s bass control. Most gaming headsets are either lacking bass or too bass-heavy. You can alter the bass as and when you need. Overall, the game audio performance is perfect for action and shooting games.

Versatility, not JUST for gaming

The EQ settings make Kraken TE a versatile headset. I used the headset while watching Orange is the New Black on Netflix, and the experience was surreal with the crispiness of the voices, a punchy bass, and excellent overall sound quality. The same goes for music.

The Razer Kraken Tournament Edition is an admirable wired gaming headset under $100. For a gaming headset at this price to provide virtual surround sound of high quality is exceptionally rare. However, with Razer Kraken Tournament Edition, you’re getting excellent surround sound for your PC packed in a stylish headset that works across different platforms.

Not only this but the gaming headset also comes with more innovative controls, and I especially love the “Bass” control. The only thing that bothered me is the overly silent microphone which is not suitable for streaming and recording purpose.
As long as you have no issues with the quiet microphone and if good quality gaming audio is your top-priority, then Kraken TE can be an ideal option. It’s a comfortable, well-designed headset that will allow you to play all day long without hurting your ears or heating them. Also, if you’re a hardcore PC gamer, the presence of spatial audio adds more value. Nevertheless, if you’re a console gamer, Razer Kraken Pro V2 would be a better option.