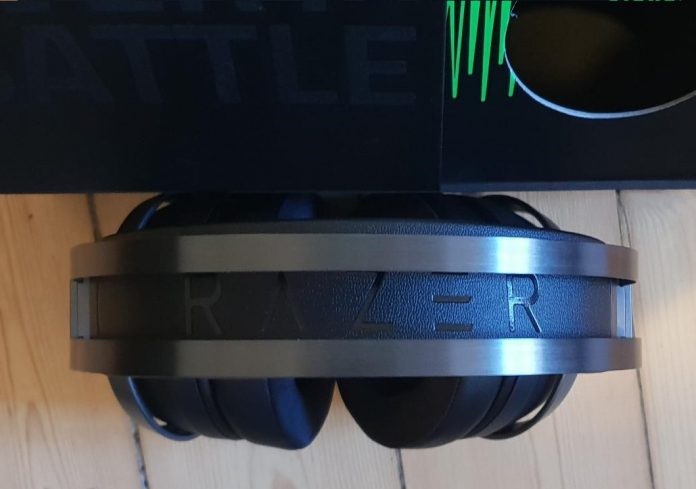 The Razer Nari Ultimate is both a hit AND a miss. With extraordinary performance at its best, but quite poor at its worst. It is an innovative and bold move from Razer that still needs a lot of work.

To be perfectly frank, I’m not that into haptic feedback, whether it’s on my keyboard, mouse or my joystick. However, when I learned that the Razer Nari headset has HyperSense audio feedback, I was intrigued.

What Haptic feedback means, is that certain sounds will make rumbles in your ear while gaming or watching a movie. I wanted to check that out.

Apart from that, Razer has always been known for bringing innovation and new ideas to the gaming hardware market. So I wanted to give the Razer Nari Ultimate the benefit of the doubt.

So here’s my review of the Razer Nari Ultimate. They’ve even got a ‘Razer Nari’ (normal) and a ‘Razer Nari Essential’ (primary) apart from the Ultimate version. But they don’t have the haptic feedback which I wanted to try out.

The Design: Heavy But Comfy

This headset comes in at a substantial 15 ounces, and it looks like they stacked two headphone pads on top of one another on each side. It’s massive – so huge that I would never wear it to the office or outside.

I’m guessing the size is due to the haptic technology, but at least the cups swivel 90 degrees, so it’s not a pain to pack them in a bag.

The size being what it may, the earphones themselves are pleasantly soft. They don’t feel uncomfortable at all. I’m sure the cooling gel has a role to play here.

So apart from being heavy, Razer has done an excellent job at keeping the headphones very comfortable to wear.

Razer never disappoints when it comes to auxiliary controls, and this one is no exception. The left cup has a mute button, a rocker which balances in-game and voice chat audio, the power button, a micro USB for charging, the headphone jack and a retractable mic.

The right side has a regular volume rocker and a slot to hold the 2.4G USB wireless transceiver which is useful if you keep on losing them, like me.

However, the biggest problem is that there isn’t a button for the HyperSense. So if you want to adjust it or turn it off, you have to do it from the computer. Thus there’s no way to turn it off if you’re using it on your phone or a console.

The mute button has the same problem that it can only be used when the headphone is connected to a computer and not anything else through the audio jack.

In other words, this headset is for PC gaming, and I wouldn’t recommend it outside of that.

The balance and volume rockers are a bit too sensitive for my taste. What I mean is that, below 75%, the volume is barely audible, but after that, it’s too sensitive.

Performance: A Cluster of Features

The primary selling point of this headset is the Razer HyperSense haptic feedback which responds to audio cues and turns it into vibration. This is achieved by drivers already present inside the headset, so your games don’t need to be equipped with it. Nor do you need special software.

The headset has an audio frequency of 20Hz to 200Hz. That’s a little on the lower end, and thus some sounds don’t pack as much of a punch as I expected. It seems Razer has put in the Haptic technology at the cost of premium sound quality.

Now don’t get me wrong. Compared to most headsets on the market the Razer Nari Ultimate still has great sound quality, just not the kind you’d expect in this price range.

As for the Haptic feedback, it really is a hit or a miss depending on what game you’re playing or what you’re listening to. For example, in Far Cry 5, the recoil on my double-barreled shotgun was far stronger than a pistol. Driving over rocky roads on a Jeep cause more of a tremble than a Sedan on a city road.

However, there are problems. For example, when the cutscenes would load, sometimes the haptic feedback was so strong, I totally missed the audio. I also kept the background music way low because otherwise, it was causing the headphone to tremble all the time.

The sensitivity of the feedback can be adjusted through Razer’s Synapse software though. It might take a few tries till you hit the sweet spot though.

There were a few instances when I was wowed by it, like when a car hit me and sent me flying. That was a powerful vibration. Moments like this, explosions, actions, etc. feels really immersive with Hypersense, once you hit the sweet spot in terms of sensitivity.

The biggest problem with the HyperSense feature is when it comes to competitive gaming. The rumble will at times deafen out valuable audio feedback such as footsteps or the direction from which a shot is coming. This means that Hypersense is a definite no-go in competitive settings such as CS:GO.

However, with the rumble turned off or turned way down, you’ll have no problems guessing where the shots are coming from because of the THX Spatial Audio (surround sound). The 360-degree sound, in my opinion, is the best thing about this headset.

Music Performance: It’s all about the Bass

When it comes to listening to music, the haptic feedback works best on party songs, especially the ones with a lot of bass. On certain songs, I could really feel the beat of the drums while the guitar slowly starts riffing behind me (spatial audio).

On other ones though, it just wasn’t syncing at all and felt unnecessary. The problem was, if you turned the Razer Sense off, the music would become very bland and muddy. It’s like the highs and lows of the song blend into the middle somewhere.

Thus, it’s just way too uncertain when it comes to songs. Movies seem to work a lot better though, especially on the Movie equalizer mode. (more on that later)

Sound Customization: Lost Without It

Razer’s Synapse software lets you customize your audio, and I honestly don’t think this headset would ever work without it. So, you can definitely forget about using it on your phone!

Here, you can enable the Surround Sound (which is an absolute must), and also fiddle with settings like Bass Boost, Sound Normalization, Voice Clarity and Haptic Sensitivity, which we talked about earlier. It has a full equalizer as well with presets for games, movies, and music.

It has several microphone settings as well like volume, sensitivity, and mic monitoring. There are also enhancements like Volume Normalization, Ambient Noise Reduction, and Vocal Clarity. I feel that the mic quality is a lot better without these enhancements though.

This is in no way a good ”plug-and-play” headset. So if you want something simple that you can just plug in and expect it to work 100%, then the Razer Nari Ultimate will disappoint.

As advertised on their website, the Nari Ultimate headset can last up to 8 hours with one charge if you have the Razer lighting and HyperSense enabled. This is very poor compared to more simple wireless gaming headsets like the HyperX Cloud Flight that can go for more than 30 hours. However, compared to more feature-rich headsets like the Logitech G935 it is pretty okay.

The Razer Nari Ultimate can go for almost 20 hours if you turn off all the lights and features which is quite good. But then again. You don’t invest in this very high-end wireless headset if you don’t intend to use Hypersense in my opinion.

The Razer Nari Ultimate comes at a pretty hefty price tag. I mean, if this same headset were available for cheaper, I would be willing to forgo some of its flaws, but right now, it seems to me like a lot of hitches need working out.

That being said, it’s still the best vibrating headset on the market, so if you’re really into ‘feeling’ your audio, you might give it a shot. Otherwise, I recommend staying away from it.

The Razer Nari Ultimate is exceptional when it works at it’s best but quite awful at its worst and is ultimately not worth the pricing for most gamers. However, if you mostly play grandiose games like Battlefield 5, Farcry or just singleplayer story games, it might be worth your time.