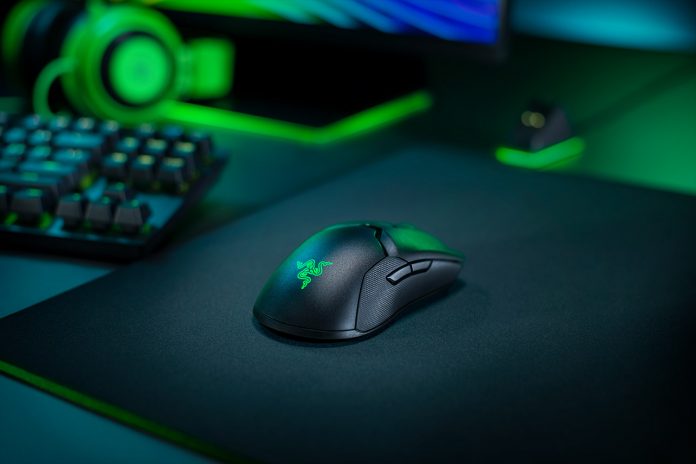 –The ultra-lightweight design of the Viper Ultimate is nothing short of extraordinary, and when combined with Razer’s new Hyperspeed tech and new Focus+ optical sensor you get something magical. It’s zero-latency connectivity, light ambidextrous design and precise sensor make it one of the best competitive gaming mice on the market.

I had a hard time hiding my joy after a few hours of testing the Viper Ultimate. All I could think was – ”Finally, a mouse to give the Logitech G Pro Wireless a run for its money”, and I cannot help but feel that was the exact intent Razer had with this mouse.

The Razer Hyperspeed technology offers a latency-free wireless connection that has effectively removed all of the usual problems with wireless gaming. The Viper Ultimate has a lightning-fast report rate and stutter-free connection that makes its performance as smooth as a high-end wired mouse. Furthermore, it is also sporting a battery life of 70 hours(without lighting), and the charging dock makes charging super convenient.

On top of that, it is equipped with the new Razer Focus+ sensor that gives it an outstanding resolution accuracy of 99.6, alongside a tracking speed of up to 650 IPS — making it the most potent gaming sensor currently on the market.

I am not surprised that several professional CS:GO players such as Chrisj and Karrigan have already switched over to the Viper Ultimate.

However, while the Hyperspeed tech and Focus+ sensor are great, the real star of the show is the Viper’s ultra-lightweight design. Weighing in at only 74g, the ambidextrous design of this mouse will make competitive gamers fall in love.

Everything about this mouse is optimized correctly for competitive gaming, and very few, if any, wireless mice can compete with the performance of the Viper Ultimate.

While it is rather pricey, I feel that the finely tuned performance and ultra-lightweight of the Viper Ultimate more than makes up for it. I would highly recommend it to gamers that love high-paced competitive games such as CS:GO or Overwatch and are looking for a wireless mouse that can perform on par with the best-wired mice out there.

An in-depth look at the Razer Viper Ultimate

You rarely see professional gamers choose wireless mice over their wired counterparts as the upsides don’t usually make up for the risks of wireless gaming. Such as stutter, poor performance on low battery, and connectivity issues. However, seeing as the Viper Ultimate is utterly free of these issues, it is not hard to see why it is already gaining traction in the esports scene.

Focus+ – One sensor to rule them all

The brand new Razer Focus+ sensor brings some serious firepower that very few products can compete with. That said, some of its specifications are downright excessive and unnecessary.

The Focus+ was developed in collaboration with Pixart, one of the industry experts on gaming mouse sensors, and it shows. It can take its sensitivity all the way up to 20.000 dots per inch, referred to as DPI. This is incredibly impressive but also rather unnecessary. For context, most professional gamers play with a DPI of around 800-2000, as going much higher will usually hurt your precision. So unless you are rocking a 49inch ultrawide monitor, and that has many more dots on your screen, I don’t see anything above 12.000 DPI being remotely useful.

The same goes for the 650 IPS, which stands for 650 inches per second. This is the maximum speed that the sensor can move your cursor per second. A high IPS is very useful for so-called ”flicks” in CS:GO, where a player has to reposition their crosshair to obtain a kill quickly. However, 650 IPS is never a necessity to pull off these plays.

But don’t worry. The Viper Ultimate might have absurd top-end specifications, but it works just as well at much lower DPI, and IPS settings, and the report rate and a resolution accuracy of 99.6% gives it a precision that almost no other sensor can compare.

In conclusion, this sensor has over-the-top specifications that you will never need. Still, its ability to perform well in both high-accuracy plays and high-speed situations is phenomenal.

Many sensors on the market need to be manually calibrated when it is used on a new surface if you want to avoid inconsistent behavior in regards to lift-off distance. Razer and Pixart have equipped the Viper Ultimate with smart tracking that can automatically calibrate itself to a new surface and thus remain consistent. I rarely swap out my mouse pad, but being able to switch between surfaces seamlessly is a lovely touch, especially if you play on a laptop and move around.

The mouse uses Razer’s Optomechanical switches, which is a light-based mechanical switch that can receive information slightly faster than ordinary switches and feels great to play with. Gamers that enjoy the feel of mechanical keyboards will love the clicky feel of the Viper.

What impressed me about the Viper Ultimate is the brand new Hyperspeed technology. It uses a modern adaptive frequency tech that scans every millisecond for interferences and instantly switches if other devices are hogging its current frequency. This makes it one of the most reliable and stable wireless tech, and with its report rate of 1ms matching that of the best wired mice, there is little downside to going wireless with the Viper Ultimate.

According to tests, the Razer Hyperspeed is 25% faster than the previous industry record, but I honestly don’t feel any difference between Hyperspeed and Logitech’s Lightspeed. Which is in no way an insult, Lightspeed is incredibly effective and reliable.

Surely a mouse, this powerful has to have some battery issues, right?

Well, no. Razer has managed to equip the Viper with all their latest cutting-edge technology and even making it more powerful than the DeathAdder, without hurting its battery life much.

If you turn off the LED lighting, the Viper Ultimate can keep going for up to 70 hours of constant playing, and even when it runs low, it charges incredibly fast. With just 10 minutes of charging, you can play for about 5 hours, and if that wasn’t enough, you can always plug in the USB wire and keep playing while it charges.

The Viper Ultimate comes with a small stylish charging dock, equipped with LED lighting that you can easily position your mouse on whenever you aren’t using it to make sure you never run out of power.

The combination of the mouse and charging dock LED makes it aesthetically pleasing and fits perfectly into RGB heavy gamer setups.

Design & Quality – Light as a feather

Mouse weight has become an increasingly important factor as competitive games have grown in popularity. The difference between a 120-gram and an 80-gram mouse is hard to overstate in games where speed and reactions are a crucial factor. Whether its performing flicks in CS:GO or rapid spell combos in League of Legends, having a lightweight mouse will significantly help you make those plays. Both in terms of ease and precision.

The Razer Viper Ultimate weighs in at only 74g, and it almost makes my Logitech G Pro Wireless feel heavy. Having a gaming mouse that weighs less than 100g is practically a must in games like CS:GO, and 74 grams is simply outstanding, and you do feel the difference.

The mouse uses an entirely ambidextrous design, which means it is not made for left or right-hand users and works well for everyone. A lot of esports athletes prefer this over the more ergonomic palm grip design, and if you like these types of mice, then I’d say that this is one of the best ones out there.

The Viper Ultimate truly is light as a feather compared to almost every other mouse on the market, but this also makes it feel a bit delicate. Not to say that the materials are poor in quality, but just that the lightness makes it seem a bit squishy.

That said, when we tested its durability, we didn’t find any apparent issues with it, and as long as you are not prone to throw your mouse around when you lose a match, you should be fine.

The Logitech G Pro Wireless has been my all-time favorite gaming mouse for some time now. Still, the even lighter and genius ambidextrous design of the Viper has made me less confident of that statement.

Performance-wise it is definitely on par with the G Pro, but the lighter design and optical switches of the Viper pull it slightly ahead. Which of these brilliant mice is the best wireless option comes down to personal preference as their design is quite different, despite both being ambidextrous.

What I do know with certainty is that the Viper Ultimate is far-and-away my favorite Razer mouse to date, and almost no wireless mouse on the market can compete with its performance and lightweight design. So if you are looking for a wireless mouse that can compete at the highest level while maintaining a stable connection and healthy battery life, then the Viper is an excellent choice.