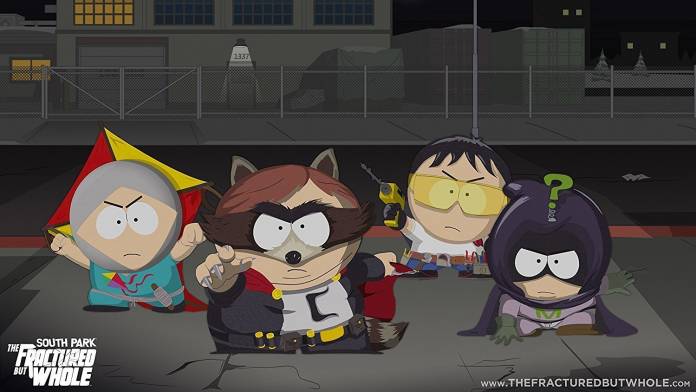 The new expansion for the South Park Fractured But Whole’s arrive on March 20. The name of this expansion is “From Dusk Till Casa Bonita.”

The original release of South Park: The Fractured But Whole, was a long time ago and hopefully, this will bring some freshness to the game and maybe cause a lot of players to return to South Park.
”From Dusk Till Casa Bonita” will bring a new class hero to the game, called ‘Netherborn.’

The new Netherborn class brought four new powers to the lineup, but we don’t have any particular abilities to go on yet. However, we do know that Mysterion is listed as a Netherborn and therefore has a general theme from which we can speculate. Also, Goth icon Henrietta Biggle joined as a support teammate.

Casa Bonita is the favorite restaurant of fan favorite Erik Cartman, which in the real world was Casa Bonita of Lakewood, Colorado. As in the game and the real world, they have cliff divers. One spoiler alert: The Gothy Vamp Kids have a new member, the sister of Mysterion(Kenny) and Casa Bonita will be the staging ground where the gang will try to save her from the dangerous vampire cult.

Ever since the release of The Fractured But Whole on October 17, players
Have been speculating about both Vampires and Netherborn. As vampires initially listed as one of the weaknesses, a player could choose from, but only Mosquito(Clyde) was actually listed as one. And Mysterion’s Netherborn classification also remained just for him. So adding Netherborn as a new hero and vampires as the main antagonist of the upcoming expansion makes perfect sense.

This leaves us with 11 classes that the players can choose from during the game. The classes are Speedster, Brutalist and Blaster, and these three classes are the ones that you can pick from the very beginning of the game. While Elementalist, Psychic, Cyborg, Gadgeteer, Assassin, Martial Artist, and Plantmancer, can be unlocked later in the game. One exciting feature is dual-classing ability, which gives players the ability to mix and match skills from different heroes.

Netherborn was one of the few heroes in the game that the players could not choose to be themselves. Another one is the Mystic. Which were part of the early development but was later scrapped. This could very possibly mean that we will see an expansion which includes the Mystic hero at some point.

One thing is clear, that is that the game remains focused on real fans of the South Park franchise. With its crude and provocative nature. This new expansion can be bought independently for 11.99 dollars, while the season pass can be purchased for 22.99 dollars which also gives you access to the two future expansions that will be released later. The next one is called ”Bring the Crunch”.

The name of the new South Park expansion “From Dusk Till Casa Bonita” is a clear reference to the Quentin Tarantino movie ”From Dusk Till Dawn.” Which also revolved around vampires.