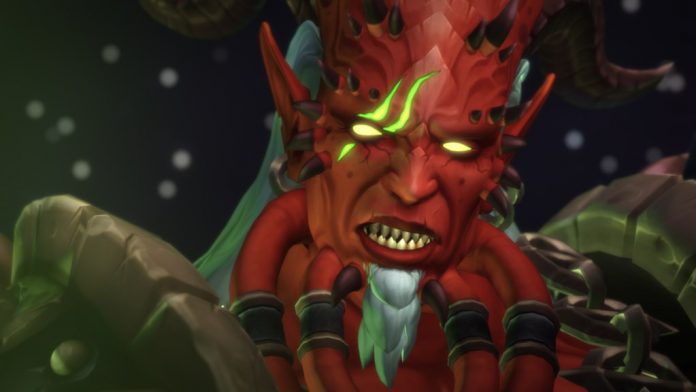 We are at a point in Heroes of the Storm where we almost certainly know which heroes we will get to see in 2017. With Alextraza(Warcraft), Firebat(Starcraft unit) and Hanzo(Overwatch) all leaked with a decent amount of certainty.

Not all of our concepts include basic abilities. We mainly chose to make full hero concept if it was crucial to give an idea of their overall kit.

NOTE: If you think some of your favorite villains are missing. Be sure to check out our earlier hero concept.

“Elune… There is only one god… and his name is Sargeras.”

The nightmare has always been an intriguing concept and Blizzard could make some fascinating mechanics around it.

”I cast off these petty illusions! Behold, the true vision of the Lord of Hell!”

Lies and deception are hard to make work as an actual mechanic in a MOBA. However, if Blizzard did manage to give Belial the power to manipulate some core mechanics of the game, that could be incredibly interesting if done right.

”You face Jaraxxus, Eredar lord of the Burning Legion!” – Jaraxxus

One of the more iconic fights and voice lines from World of Warcraft. Having a hero build around gathering enough power to unleash an Eredar lord of the Burning Legion just sound like a lot of fun.

Steve Blum’s voice acting of Zoltun Kulle is more than enough reason to bring Zoltun Kulle into the Nexus. Besides that, he is one of the most exciting characters from Diablo and not a straight-up villain but more of a very morally ambiguous character on a quest for power.

Related: Best MOBA’s on the market.

Zurvan, The Ancient One

No allegiance but to self. Kill or be killed

Zurvan would create an exciting opportunity to make a character that is less reliant on his team and even have the chance to become ”fed”.

Main antagonist from the perhaps the most epic quest chain ever in World of Warcraft. Putress has phenomenal voice acting, and his Plague could make for a great mechanic.

”Awaken my child, and embrace the glory that is your birthright. Know that I am the Overmind; the eternal will of the Swarm, and that you have been created to serve me”

A clear opportunity to introduce elements from real-time strategy games into Heroes of the Storm. It could potentially be a lot of fun to control hordes of zerg instead of an actual hero.

All of the Overmind’s primary abilities has global range, but all require vision to land.

Related: Heroes of the Storm vs League of Legends

”The expendable have perished… So be it! Now I shall succeed where Sargeras could not! I will bleed this wretched world and secure my place as the true master of the Burning Legion. The end has come! Let the unraveling of this world commence!”

One of the most iconic villains of the Warcraft franchise and with his recent demise in World of Warcraft: Legion he is looking for another world to bring about his fiery destruction. What better place than the Nexus?

Pain… agony… my hatred burns through the cavernous deeps. The world heaves with my torment. Its wretched kingdoms quake beneath my rage. But at last, the whole of Azeroth will break, and all will burn beneath the shadow of my wings.

Probably the most requested hero among the Heroes of the Storm community since the release of Kel’thuzad and it is easy to see why.

And the Evil that was once vanquished shall rise anew. Wrapped in the guise of man, shall he walk amongst the innocent, and Terror shall consume they that dwell upon the Earth. The skies shall rain fire, and the seas will become as blood. The righteous shall fall before the wicked, and all of Creation shall tremble before the burning standards of Hell!

The most requested Diablo character and the eldest of the prime evils. Heroes of the Storm need more Diablo villains, and Mephisto is among the greatest.

Poll – We would love to hear which of these villains you are dying to see in Heroes of the Storm.