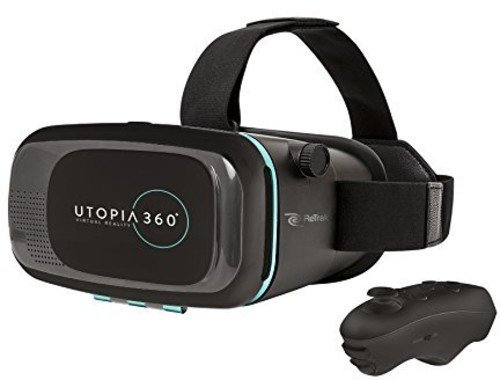 VR headsets are currently flooding the markets, with a host of new iterations seeming to arrive every year. One of these VR sets, which is on the cheaper end of the VR spectrum, is the Utopia 360, a VR device that functions with a corresponding android smartphone. This piece of equipment operates very similarly to the other smartphone-centric devices on the market, with the smartphone being inserted into the headset and by using a series of applications to navigate different experiences.

The Utopia is compatible with most Android devices, making it widely accessible and able to use to most android users. This makes the resolution and quality of the picture dependent on whatever phone it is connected to. The installation process is relatively simple, streamlined and takes very little time at all. The user then puts on the headset and initiates the VR experience. If you want to know everything you can expect from the Utopia 360 VR, you can click here for a quick rundown.

Unlike many of its competitors, the Utopia 360 VR Headset comes at a much more affordable price. The headset is widely available and is sold for the very friendly price of around $15.00-$35.00 at most major retailers. Furthermore, it comes with a joystick controller that allows for either one-handed or two-handed use that is compatible with a certain number of apps and games and allows them to be considerably more straightforward to use.

This is especially useful on gaming apps, as it makes quick time reactions much easier to navigate, thereby creating much more engaging experiences. It also comes with Bluetooth headphones that further assists the user in immersing themselves into the VR world. It also comes with cushioning to try and make the headset as comfortable to the user as possible, which is especially crucial after extensive uses or for long periods of time.
Another substantial benefit is that the Utopia is compatible with specific Augmented Reality apps, allowing a whole new slew of possibilities and experiences that many other devices just do not offer. This allows the user to see the real world, but with virtual guides or pieces of information that create a much more productive and more educational experience. This can especially come in handy while on vacation, as it can perform tasks such as auto-translating foreign languages

Unsurprisingly, with a cheaper product, there comes certain drawbacks and limitations that prevent the Utopia 360 from being precisely on par with some of its more expensive competitors. The Bluetooth controller is not optimized for all of the applications and games available for VR devices, making navigation a much more difficult experience in many instances.

Moreover, many customer reviews make claims about the headset being uncomfortable, considerably more than other such devices. Also, because of the design of the lenses, there can be certain distortion effects and issues on the borders of the screen that can be quite distracted and take away from the immersive experience. The resolution, as mentioned earlier, is entirely dependent on the phone that is in use, so the quality can wildly vary.

In summary, the Utopia 360 is a decent VR device that comes at a very low and affordable price but has a number of limitations that put it a tier lower than some of its competitors. While the Bluetooth controller is handy in some instances, especially while playing games, the limited number of apps that it is compatible with makes it useless in a wide array of situations. It offers a terrific glimpse into the VR world at a bargain price and many of the same hardware specifications that much more pricey devices often flaunt.
Any customer who is unfamiliar with the VR world and is unsure whether or not it is worth the investment would be well to try this product because of its low price. Furthermore, the easy to use nature acts as an excellent introduction that can get novice users more familiar with the complexities of VR devices and the particular challenges that can accompany owning them. It is a solid sample of what this emergent technology has to offer and the potential that it holds.

Should you buy a special laptop for gaming?